Army Demolishes A Home In Hebron 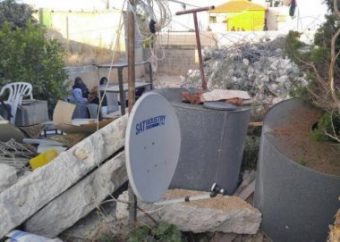 Israeli soldiers invaded, on Sunday at dawn, Beit Amra village, east of Yatta town, south of the southern West Bank city of Hebron, and demolished a home of a Palestinian teen accused of stabbing an Israeli settler woman to death.

Coordinator of the Popular Committee in Hebron Rateb Jabour said a large number of soldiers and military vehicles invaded the village, during early dawn hours, and demolished the home of Bader Abdullah Ed’eis, whose son was taken prisoner on January 18th, 2016.

Israel accuses his son, Morad, 16, of carrying out a deadly stabbing attack in Otniel Israeli colony, nearly six months ago.

Jabour stated that the demolished home was a 2-story building, inhabited by several family members, and that the army did not even allow them to remove their furniture and belongings.

The soldiers also kidnapped one Palestinian, identified as Mahmoud Jamal Makhamra, 27, from his home in Yatta, in addition to invading and searching several other homes and a medical center, causing excessive property damage.

|Ed’eis: “My Son Did Not Kill The Settler, He Was Playing In Schoolyard”|

In addition, the soldiers invaded a medical lab in Hebron city, and violently searched it, causing excessive damage, in addition to searching many homes in the area.