Army Kidnaps One Palestinian In Jerusalem 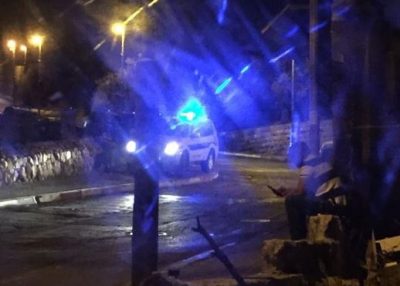 Israeli soldiers kidnapped, on Thursday at dawn, a young Palestinian man from Silwan town, in occupied East Jerusalem, and released five, who were previously detained, after issuing orders denying them access to the Al-Aqsa Mosque.

The soldiers invaded the family home of Mohammad Shiokhi, 20, searched the property and abducted him.

Mohammad is the twin brother of Ali Shiokhi, who was killed by the army on Tuesday evening, October 11, 2016.

The army also released five Palestinians from different parts of Jerusalem, after issuing orders denying them access to the Al-Aqsa Mosque, and its surrounding areas, for different periods.

In related news, an Israeli court in Jerusalem extended the remand of Ghadeer Jamjoum, and her nephew Mohammad al-Hashlamoun, until this coming Monday for further interrogation.

The two were kidnapped, Wednesday, from their homes in the ar-Ram town, north of Jerusalem.