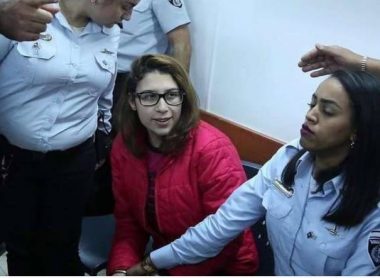 The Israeli army refused, Sunday, a court order for the release of Nour Tamimi, 21, on a 5000 Israeli Shekels bail, and decided to hold her for additional 100 days, after filing a new indictment against her.

Nonviolent activist, Mohammad Tamimi, said the army decided not to release Nour on bail, although an Israeli court allowed her release, and filed a new indictment to keep her detained.

Nour Tamimi was abducted along with world-renowned teen journalist ’Ahed Tamimi, 17, and ‘Ahed’s mother, Nariman, 43, after a video recording surfaced, showing them removing Israeli soldiers from their yard, especially when the soldiers used it to fire on Palestinian protesters, in Nabi Saleh village, northwest of Ramallah.

On December 24th, an Israeli court denied an appeal for the release of ‘Ahed, who stands accused of “assaulting soldiers.”

When Ahed was 12, her mother’s cousin, Mustafa Tamimi, was killed before her eyes during a protest, shot in the head by a gas canister. One year later, she witnessed the army shoot and kill her uncle Rashadi.

Approximately two weeks ago, her cousin Mohammed, nearly her age, was shot in the face by a rubber-coated bullet that penetrated his skull. He remains unconscious.”