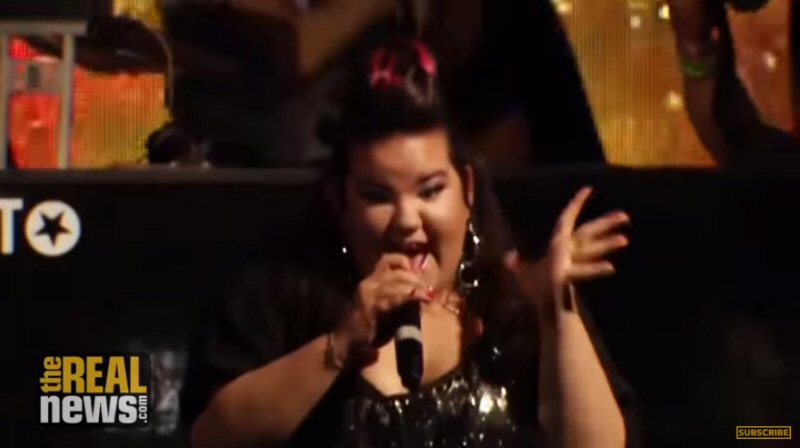 Danielle Alma Ravitzki explains how the Israeli government uses the Eurovision song contest to whitewash and pinkwash its crimes against Palestinians. This year the contest will take place in Tel-Aviv, and artists from around the world are calling for a boycott.

MARC STEINER: Welcome to The Real News Network, I’m Marc Steiner. Great to have you all with us.

This year, the Eurovision music festival takes place on May the 14th in Tel Aviv. Israel won the right to host the Eurovision competition because Israeli singer Netta Barzilai won first place last year. Now, her victory was celebrated with a massive party in Tel Aviv on the very same day that that Israeli forces killed 59 unarmed protesters in Gaza, who are commemorating the 70th anniversary of the Nakba, which is the ethnic cleansing of Palestine in 1948 during what the Israelis see as the war of liberation following the founding of the state of Israel.

For the Israeli public, being part of Eurovision is a huge deal. Even though Israel is not part of Europe, it’s symbolically extremely important. There’s now a worldwide campaign calling on Eurovision not to hold the event in Israel. Dozens of artists in the United Kingdom appealed to the BBC not to cover the contest. Many artists in Australia, Iceland, other nations, have declared they will not compete if Eurovision is held in Tel Aviv. And to celebrate Israel’s hosting Eurovision, last year’s winner, Netta Barzilai, released a brand new song. Now let’s watch a few seconds of that.

Now here to discuss the cultural and political significance of all of this is Danielle Alma Ravitzki. She’s joining us now from New York City. Danielle is a Jewish Israeli human rights activist, a BDS activist, a performer who is currently producing her third album, where she composes music to the words of Palestinian poet Dareen Tatour, who was jailed in Israel, sent to prison for poems she’d published. Alma Ravitzki is also a member of the organization Boycott: Supporting the Palestinian BDS Call from Within.

MARC STEINER: And Danielle, welcome. Good to have you with us here on The Real News.

DANIELLE ALMA RAVITZKI: Hello. Thank you for having me.

MARC STEINER: I can’t wait to hear the entire album. I’m going to play a little cut from it, but we’ll talk about that in a minute or two.

MARC STEINER: So in Israel, the official Israeli line is that this cultural boycott is wrong because culture transcends politics. And a lot of artists who want to participate in Eurovision don’t think they’re making a political decision, they think they’re part of a consciousness. Even some people I’ve talked to have said, “We’re doing this because I can support the Palestinians and still perform, because this is about universal love and performing our music.” So what’s your sense of that conflict?

DANIELLE ALMA RAVITZKI: First of all, as an artist I find this patently false because I think people have this tendency to believe that politics is something that has to do with parliament and government and talking about the specific people within those systems. And that is wrong. Everything is political, everything. You wake up in the morning, you drink coffee, the clothes you wear, your socioeconomic status, you gender, your sexual orientation, everything is political. And I think that art in particular is political. It is a political statement.

And here are plenty of artists that went on stage and spoke about peace and coexistence. First of all, it didn’t lead to any change. And second, the Israeli society is too indoctrinated and too brainwashed to basically bring about change. And it’s very important to realize that Israel is an apartheid state. There are over 65 laws that basically deprive Palestinian citizens of Israel from basic human and civil rights that their Jewish counterparts get to enjoy. And there are separate roads for Jews and for Palestinians in the West Bank, and Gaza is most definitely a ghetto. And so, Israel is an apartheid state. And just like international boycott ended the apartheid regime in South Africa, that would do the same in Israel.

MARC STEINER: So would you, as an artist, as a singer, as a writer, as a composer, would you also not perform in your own country?

DANIELLE ALMA RAVITZKI: I can’t. The BDS calls outsiders and foreigners to basically boycott Israel. I can boycott settlements and I can not purchase settlement goods and settlement product, but the BDS does not aim to speak with Israelis or initiate even with them. It’s about the world and citizens of other countries who boycott Israel.

MARC STEINER: So what is your assessment, very quickly, of where you think this will go? I mean, do you think that there will be a massive number of artists who will not participate in the Eurovision if it’s in Tel Aviv in two months in Israel, or do you think it will fizzle out? I mean, what’s your political sense of what’s going to happen?

DANIELLE ALMA RAVITZKI: I think that the world is much more aware of Israel’s atrocities and human rights violations. And so, first of all, the BDS is something that is now a debate and people talk about it and people see it. And a lot of artists canceled, too. As to Eurovision, Iceland signed a petition calling to boycott Israel as well as Ireland. And so, there is a growing awareness of what Israel is doing. But I think that the fact that people talk about it is quite a success, I believe.

MARC STEINER: So Israel clearly put a lot of money, time, and effort promoting Netta Barzilai’s song Toy last year so they could win, setting up the possibility that Israel would then become the host of the Eurovision. And her music seems to be about women’s empowerment from what I’ve heard. And we just heard a few seconds from it earlier. I mean, do you think that her message coincides with what the Israelis want to see the world see Israel as? Is there something deeper about her music that is actually about women and about more liberation? I mean, is there a contradiction inside of there? And how does it fit into the whole part of what Israel did to push her to become the winner of this contest?

I think there was a great contradiction and I actually think that as a woman and a feminist I’m really disgusted by her cynical use of women to promote a very misogynistic and chauvinistic ideology which is Zionism. And I think that Neda is not an intersectional feminist. She basically promotes white feminism, which is equivalent to white supremacy. And there were so many Palestinian women that Israel murdered. There was a pregnant woman in Qalandiya checkpoint that Israeli soldiers shot to death. And there is Aisha Rabi, who was stoned to death by Israeli settlers. And even in the song that I composed, Dareen writes about a woman who was basically left bleeding to death by Israeli soldiers. Netta does not address his woman. I don’t think she even cares about them, to be honest. And Palestinian women are the most oppressed in Israel and West Bank and Gaza.

And so, for me, promoting white feminism is the same as promoting white supremacy, especially in an ideology such as Zionism, which is inherently masculine and belligerent and violent and adores the army, which is nothing, there is nothing feminist about it, the complete opposite in fact.

MARC STEINER: So another couple of quick points here just to get through in our conversation. Eurovision is extremely popular in the LGBTQ community around the world and a lot of the artists from that community and saying, “Go to the boycott.” A lot of people are saying, Wait, you can’t do that, because Israel is one of those countries where people who are gay and lesbian and trans and queer have more rights and more abilities to live a life without being beaten, stoned, and killed than they do in other places, so you don’t have this story straight.” So unpack that for us a little bit.

DANIELLE ALMA RAVITZKI: This is what is called pinkwashing. It’s basically the whitewashing of the LGBTQ community. And just like Israel does not promote women’s rights in any way or form, it does not promote LGBTQ rights. And I believe that racism, misogyny, homophobia are a package deal, whether it’s in individuals or states. And usually when one of them is performed, then the other ones are performed too. And so, Israel deprives the LGBTQ community of basic rights. For example, same sex couples cannot get married in Israel. And also there was this whole debate about rights. And while the debate is indeed worthy and it is something that is problematic, I believe that the fact that it is only applied on heterosexual couples and not on homosexual couples is oppression by definition. And whether you ban it or whether you allow it, you should allow it or ban it from everyone.

And the moment that you take one group of people and you apply a certain law that they can abide by, but it does not apply to another group of people within the same geographical location. This is by definition oppression. And so, Israel is not tolerant towards the LGBTQ community at all.

MARC STEINER: We’re here talking in Danielle Alma Ravitzki about the Eurovision contest that’s coming to Tel Aviv May the 14th and the international movement to boycott that event in Israel. And in a moment, we’re going to come back and finish our conversation with Danielle and explore the work she’s doing as she works with the words of Dareen Tatour, who’s a Palestinian woman put in prison for her poetry. Danielle is composing an album of her work. We’re going to hear a little bit about that when we return, so you don’t want to miss that conversation.

Thanks for being with us. I’m Marc Steiner here for The Real News Network.