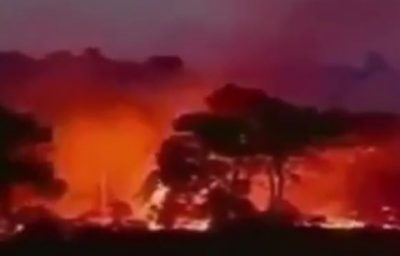 Despite a total lack of evidence of any human cause of the wildfires that have burned in Israel for nearly a week, Israeli troops have detained 23 Palestinians. This follows a statement Thursday by Israeli Education Minister Naftali Bennett, who claimed “only someone who this land does not belong to would be capable of setting fire to it”.

By this statement, he pointed blame at Palestinians, who have continuously lived on the land and had connection to it for thousands of years prior to the displacement of hundreds of thousands when Israel was created on their land in 1948.

Both Israeli and Palestinian fire crews have come together to fight the wildfires, which have broken out in several parts of Israel and the West Bank. On Saturday, new fires ignited in the Nablus area, in the northern part of the West Bank, endangering the homes of a number of Palestinian families from the village of Qousin.

On Friday, Israeli journalist Meron Rapoport opined on the Middle East Eye website that “the wave of fires has certainly shown how ready the Israeli leadership is to use any opportunity to portray the Palestinian minority as the enemy within, without waiting for evidence or even trying to pretend that it seeks cooperation with its 1.5 million Arab citizens.”

Also Friday, Israeli troops detained a Palestinian citizen of Israel following a mistranslation of a Facebook post he had made, and charged him with “incitement”.

Anas Abu Daabis, 24, had posted a statement in Arabic that was critical of Arabs who had praised the wildfires. Abu Daabis pointed out the “idiocy” of some Arabs who believed that the wildfires were God’s revenge on Israel for considering a ban on the Muslim call to prayer inside Israel.

“It’s a wonder”, Abu Daabis wrote, “when the brain stops working and turns into an idiot”. Israeli authorities stormed his home in the southern Negev and arrested him, claiming that somehow his post was inciting people to start fires.

Thousands of Israelis and Palestinians have had to evacuate their homes since the fires began, and at least 12 people have been injured, mainly due to smoke inhalation.

In early November, Israeli authorities warned that the country was on the cusp of an unprecedented drought, with the water flowing from the Jordan River into the Sea of Galilee at a record low.

This is the third year in a row of extreme, record-breaking drought in the region. The rainy season is about to begin, but very little rain has been reported so far. Last year, during the winter rainy season, the Sea of Galilee rose just 8.6 inches, which is seven times below the average rise of 63 inches each winter, according to the Israeli Water Authority.