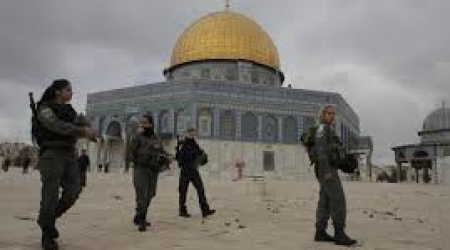 Three hundred Palestinians from besieged Gaza were permitted, on Friday, to visit Al-Aqsa Mosque in annexed East Jerusalem, according to Palestinian officials, following a recent decision to lift a ban implemented last week in response to a deadly shooting in Tel Aviv.

The devotees, all of whom were above the age of 50, traveled to Jerusalem via Erez crossing to pray at the mosque for the second Friday of the Muslim holy month of Ramadan, according to a Palestinian liaison official.

The visits come just a day after Israeli authorities lifted a ban on visitations by elderly Palestinians from the Gaza Strip, and following the suspension of all coordination with the small Palestinian territory, in a punitive response to an attack in Tel Aviv that left four Israelis killed and at least a dozen wounded.

Visitations by elderly Palestinians, from the Gaza Strip to Al-Aqsa, were implemented as part of a ceasefire agreement that ended Israel’s 2014 offensive on the besieged enclave.

However, due to Israeli security concerns and Jewish holidays, visitations have been frequently interrupted since their introduction.

Palestinian officials told Ma’an News Agency that 500 worshipers were expected to visit Al-Aqsa on Friday, for Ramadan. However, Israeli authorities have continued to freeze the permits, of all Palestinians in the Gaza Strip, which do not fit the criteria of the 2014 ceasefire agreement.

Israeli police released a statement, on Thursday, saying that entry into Jerusalem for Friday prayers, for Palestinians from the occupied West Bank, would be determined according to decisions made by the Israeli Minister of Defense.

Last week, the Israeli Coordinator of Government Activities in the Territories (COGAT), which implements Israeli policies in the occupied Palestinian territory (oPt), issued an order  which froze more than 83,000 permits allowing Palestinians to enter Israel and annexed East Jerusalem.