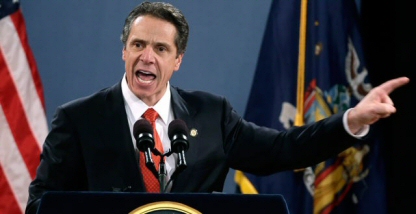 New York Governor Andrew Cuomo signed an executive order, on Sunday, that will penalize people and businesses in support of the non-violent movement to boycott of Israel.
In a speech to The Harvard Club, Cuomo said that New York would “lead by example.”

“We are also a place of action,” he continued:  “We want to take immediate action because we want Israel to know that we’re on their side. If you boycott against Israel, New York will boycott you.”

After completion of the process, executive-branch companies will be required to distance themselves from any organization or person on the list.

“The State of New York will not permit its own investment activity to further the BDS campaign in any way, shape or form, whether directly or indirectly,” the order states.

Legal organizations have previously labeled attempts to push forward anti-BDS legislation “21st Century McCarthyism,” and warned that it would create a “blacklist” of human rights advocates, mirroring the treatment of those who campaigned against Apartheid in South Africa.

The Center for Constitutional Rights, National Lawyers Guild, the New York Civil Liberties Union and Palestinian Legal have continuously called anti-BDS pressure politically motivated and an attack on the freedom of speech.

The New York legislature attempted to push through an anti-boycott motion for months due to pressure from pro-Israel lobby groups, but was unsuccessful.

The latest move by Cuomo has widely been seen as an attempt to sidestep the legal process and implement the policy on his own, Salon reports, according to the Palestine News Network (PNN).