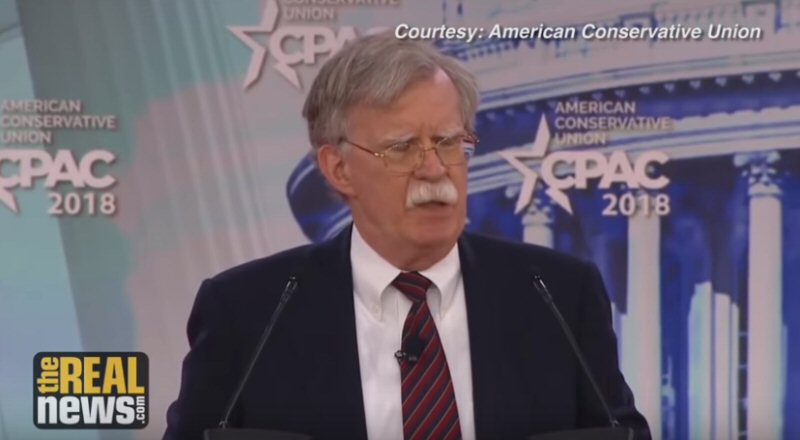 When Israel invaded Lebanon in 2006, then-Ambassador John Bolton worked to prevent a ceasefire, acting as “an asset for Israel against the interests of his own secretary of state, his own State Department, his own superiors, and his own president,” says Phyllis Bennis of the Institute for Policy Studies.

Phyllis Bennis is a Fellow and the Director of the New Internationalism Project at the Institute for Policy Studies in Washington D.C. She is the author of Understanding the Palestinian-Israeli Conflict: A Primer, Before and After: US Foreign Policy and the September 11 Crisis, Ending the US War in Afghanistan: A Primer and Understanding the US-Iran Crisis: A Primer. Her most recent book is Understanding ISIS and the New Global War on Terror: A Primer.

SHARMINI PERIES: It’s the Real News Network. I’m Sharmini Peries coming to you from Baltimore.John Bolton was recently appointed President Trump’s national security adviser, replacing Gen. McMaster. Bolton’s appointment has been so controversial that there has been a great deal of international outrage because of his history at the United Nations when he served as the U.S. ambassador to the U.N. under George W. Bush and under Secretary of State Condoleezza Rice. The specific case I’m talking about here is July of 2006, wherein Israel invaded Lebanon, starting a war that lasted over a month, claiming the lives of over a thousand Lebanese, 120 Israelis, and 50 foreign nationals. According to an interview with Danny Gillerman, the Israeli ambassador to the U.N. at the time, the French government tried to bring a resolution to the Security Council to stop the war. And then-Secretary of State Condoleezza Rice had actually approved it. Ambassador Danny Gillerman says that Bolton approached him, revealed that Rice intends to support the resolution, and ask him to intervene by calling the Israeli Prime Minister, Ehud Olmert at the time, and have Olmert call President Bush and put pressure on him to block the French resolution to stop the war. This fact is now also confirmed in the memoirs of former Israeli Prime Minister Ehud Olmert, which was recently published.Now joining me to discuss all of this is Phyllis Bennis. She’s a fellow and director of the New Internationalism Project at the Institute for Policy Studies in Washington, D.C. She’s the author of many books, including “Understanding the Palestinian-Israeli conflict: A Primer.” Thanks for joining me, Phyllis.

PHYLLIS BENNIS: Always good to be with you, Sharmini.

SHARMINI PERIES: All right. Phyllis, take us back to the situation in 2006. Why did Israel invade Lebanon, and why was it so difficult to reach a cease fire, and what was Bolton’s involvement in all of this?

SHARMINI PERIES: Now, Phyllis, given this kind of history with Bolton, and now he’s inside the White House where we are actually dealing with the possibility of isolating Iran in the region and going into a situation where the nuclear agreement with Iran is going to be unraveled, and given this history what kind of advice do you expect that he would be giving Trump at this time?

PHYLLIS BENNIS: Well, this is a very dangerous moment, Sharmini. As you say, there is a great deal of fear, I think all over the world, frankly, and certainly here in the United States, certainly in Iran, certainly among the other six partners of the U.S. who signed the Iran nuclear deal back in 2015, that come May 12th, which is the deadline day when Trump has to either recertify that Iran is in fact abiding by the terms of the agreement something that the International Atomic Energy Agency and all independent observers have agreed it is abiding by the terms. They either have to do that or say they’re no longer abiding by the terms and we’re going to reimpose those nuclear-based sanctions that were lifted in the context of the agreement. If that happens, all bets are off. It essentially tells Iran we’re out of here, the agreement is no more, and gives them the right to go ahead and restart the effort to rebuild their nuclear power program, including enriching uranium.Now, the Iranians may choose not to do that, but it would be an incredibly dangerous moment. And what we know about John Bolton is that he has been advocating for not only preventing the Iran nuclear deal, he tried very hard to stop it, as did the Israeli Prime Minister Benjamin Netanyahu, who as you remember back in 2015 was invited to address a joint session of Congress, came here to the Congress, addressed the Congress in the Capitol as if it was his house, if you will. As if he was making a State of the Union address. And urged members of Congress in our country to vote against their president, who was urging them to support the Iran nuclear deal. It was an outrageous display of disdain for U.S. sovereignty, if you will. And we know from the former minister of defense in Israel, Shaul Mofaz, that Bolton had pressured him as well in the past. There was an interesting quote from Mofaz just in the last day or two when he said, I have known John Bolton ever since he was the U.S. ambassador to the United Nations. He tried to convince me that Israel should strike Iran.So here’s John Bolton as the U.S. ambassador trying to pressure the, the secretary of defense, the minister of defense of Israel, that Israel should be attacking Iran. It’s the height of violation of any sort of accountability to his own chain of command, to his own president, to his own secretary of state, to his own State Department.So clearly Bolton views his own position of saying that we should be attacking Iran, we should end the nuclear deal, we should bomb Iran. Very reminiscent of the old John McCain line, bomb bomb bomb, bomb bomb Iran. All very clever. And this is exactly what John Bolton is now saying, that we should bomb Iran. He’s telling Israel they should bomb Iran. And that the Iran nuclear deal that has worked so powerfully for the last three years should be abandoned. This is very, very dangerous because we know that will be the advice that John Bolton is giving to President Trump.

SHARMINI PERIES: All right, Phyllis. We’ll leave it there for now, but a lot more to pursue in terms of what the, Donald Trump’s security adviser is going to be telling him in the coming days and months. So I thank you so much for joining us today.

SHARMINI PERIES: And thank you for joining us here on the Real News Network.

WAFA: “Appeal Court of The Hague to hear case against Israeli Generals”