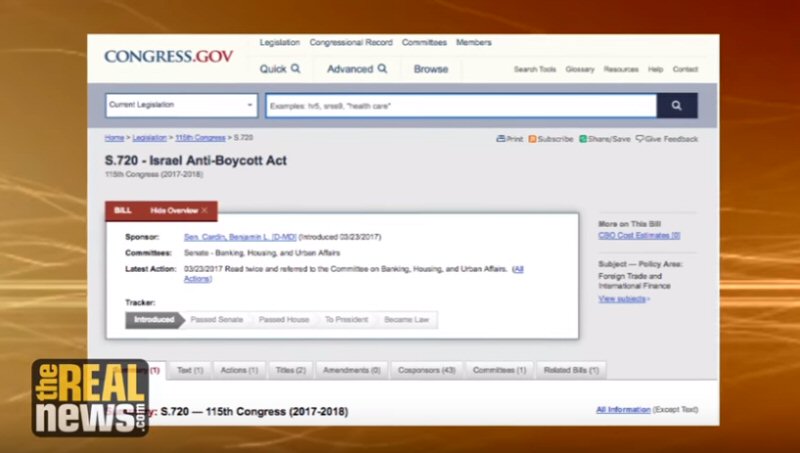 A bipartisan Senate bill would make boycotting Israel punishable by up to 20 years in prison. But, a new pushback from groups, including the ACLU, could help stop the ‘draconian’ measure, says Josh Ruebner of the US Campaign for Palestinian Rights.

AARON MATE: It’s The Real News. I’m Aaron Mate. Could boycotting Israel land you in prison? Well, in the US, that’s now a possibility. A bipartisan bill targets supporters of the global boycott movement against Israel. The so-called Israel Anti-Boycott Act would make support of the boycott a felony. Violators would face a minimum penalty of $250,000, a maximum of $1 million, and up to 20 years in prison. The measure has the support of dozens of Democrats, even some known as being progressive. It was drafted with the help of the American Israel Public Affairs Committee, or AIPAC. On Tuesday, the American Civil Liberties Union released a letter urging lawmakers to oppose it, saying the bill “would punish individuals for no reason other than their political beliefs.” Josh Ruebner is policy director of the US Campaign for Palestinian Rights, and he’s the author of the forthcoming book, Israel: Democracy or Apartheid State. Josh, welcome.

JOSH RUEBNER: Thanks so much for having me.

AARON MATE: Let’s start with this bill. Now it was unveiled a few months ago, but the fact that the ACLU is weighing in now has gotten it a new round of attention. Talk about what the bill contains.

JOSH RUEBNER: It’s the most draconian of the dozens of anti-boycott, divestment, and sanctions bills that had been introduced both at the federal level and the state level. It’s the most serious and has the most real ramifications, because as you mentioned at the outset, theoretically a corporate executive could wind up being jailed for 20 years for not wanting to do business with an Israeli settlement. The notion that you can put in prison somebody for making a moral decision to boycott in the United States of America is just fundamentally at odds and a contradiction to the founding values upon which this country was based.I mean, let’s not forget that this country was founded in large part upon an act of civil disobedience, an act of boycott, of course, the Tea Party and dumping the British tea into the ocean to protest taxation without representation. Throughout the history of this country, boycotts have been used to advance all types of causes from abolishing slavery to gaining women’s enfranchisement to promoting civil rights to promoting farm workers’ rights, et cetera. Of course, boycott is not a tactic of the left or of the right. It’s used by both to pursue their political goals, and it’s a fundamental First Amendment guaranteed right that we enjoy.

AARON MATE: What is the mechanism that the bill attempts to use for imposing this penalty? There’s some amendments inside it to laws that are decades old?

JOSH RUEBNER: Very cleverly written bill. As you mentioned at the outset, the American Israel Public Affairs Committee not only had a role in bringing this bill forward, but also made it a centerpiece of this lobbying effort earlier this spring when it sent thousands of its grassroots supporters to Capitol Hill. It’s very clever, because nowhere in the actual text of the bill does it say, “You might go to jail for 20 years if you boycott Israel or an Israeli settlement product,” but you have to look at underlying language which leads to more underlying language that brings up these criminal penalties.

AARON MATE: Josh, you mentioned Israeli settlement products, which raises a very interesting feature of this bill. You know, there’s been some debate inside left-wing movements about whether boycotting should extend to all of Israel or to just the occupied territories. Some people favor just boycotting the territories. What’s interesting in this bill is that it also seeks to target people who want to focus the boycott just on the territories, which Israel, as we all know, is illegally occupying. It refers to that as Israeli-controlled territories. Can you talk about that?

JOSH RUEBNER: That’s correct, and that’s another problematic part of this bill. Senator Cardin from Maryland, who’s the lead sponsor of this bill, says that he’s for a two-state resolution of the Israeli-Palestinian issue. He says that he opposes the expansion of Israeli settlements, but he’s actually been quite a leader in Congress in trying to conflate Israel and say that it is the same thing as the, quote-unquote, “territories” that it controls. He passed language that went into a trade bill in the last Congress which makes it a priority in US trade negotiations to insist that foreign countries not engage in BDS campaigns against Israel or Israeli-controlled territories.What his bill does in essence, in addition to criminalizing BDS in this country, is trying to legitimize the existence of Israeli settlements. Both Human Rights Watch and Amnesty International have called upon foreign governments and multinational corporations not to do any business with Israeli settlements or their products. Amnesty International right now is actually running a campaign to ban the importation of Israeli settlement goods. What Senator Cardin’s bill is trying to do is counteract this momentum that’s building to try to force grassroots change through these BDS campaigns.

AARON MATE: Josh, speaking of Senator Cardin, there was a piece today in The Intercept by Glenn Greenwald and Ryan Grim. They write that many of the bill’s co-sponsors don’t appear to have a firm grasp of what’s actually inside of it. That actually might include the lead sponsor himself, Senator Ben Cardin of Maryland. The Intercept interviews Senator Cardin about his bill, and this is what he said.SEN.

BEN CARDIN: I think I know the bill fairly well. I don’t believe we have criminalized. I think our issue is US participation in international organizations speaking out against the UN actions. I think that’s the bill. Now there are other bills that are out there, but I think the bill that Senator Portman and I had are aimed in that direction. [inaudible 00:06:34].

AARON MATE: That’s Senator Ben Cardin. Josh, Cardin says there, “I don’t think we have criminalized,” inside his bill.

JOSH RUEBNER: Well, either Senator Cardin is being incredibly disingenuous with The Intercept, or it tells you quite a bit how legislation is made on Capitol Hill where senators don’t even understand bills that are introduced in their name. In either case, whether he’s being disingenuous or whether he really doesn’t know what’s in the bill introduced in his name, the implications are clear. According to the ACLU, this absolutely does criminalize the act of boycotting Israel or its settlements, and could land someone in jail for up to 20 years for doing so.

AARON MATE: The ACLU weighing in on this, that is a pretty rare action for them to come out so forcefully against an issue like this. There are many people in media and in civil society who just avoid the issue of Israel, because for some people, it’s so politically explosive. Can you talk about their move here to come out against this bill?

JOSH RUEBNER: It’s actually not something new for the ACLU. In the last Congress, they also opposed anti-BDS legislation in Congress, and they’ve been fundamental in defeating some anti-BDS bills at the state level as well. They’ve been very firm in their conviction all along that attempts to legislate against boycott, divestment, and sanctions, and to try to deny state contracts to people in institutions that are engaging in BDS campaigns, is a direct violation of the First Amendment.

AARON MATE: I mentioned The Intercept pointing out that some lawmakers appear to not know what’s in the bill that they’re sponsoring. Glenn Greenwald and Ryan Grim write that that might have something to do with the fact that you have this dynamic in Congress where many lawmakers just reflexively support whatever AIPAC puts in front of them. Can you talk about the role that AIPAC played in this and the influence they have more broadly over lawmakers on matters pertaining to Israel and Palestine?

JOSH RUEBNER: Well, sure. They had their annual policy conference in March where this legislation was unveiled, and then they had thousands of their grassroots supporters go up to lobby their members of Congress. We know for a fact that AIPAC has not been pitching this to members of Congress as saying, “Hey, help us jail supporters of BDS for 20 years.” They’re going in there and obfuscating what the real ramifications of this legislation are. When we’re raising this with members of Congress and their staff, they’re quite concerned, because as I mentioned earlier, it’s not at all clear from the plain text reading of the bill that these are the implications, but in fact, this is what the bill would accomplish by amending underlying law.

AARON MATE: I just want to mention a few names. I mentioned that Democrats are behind this as well. It’s mostly Republicans, but there’s a lot of Democrats. They include Adam Schiff, who’s been really vocal especially on the Trump-Russia issue, and also Ted Lieu, who stood up against the US-backed Saudi campaign in Yemen. He’s been very vocal on that, but here he is lending his name to this measure against people who want to support a boycott of Israel.

JOSH RUEBNER: Well, there’s been a phenomenon for a long time in American politics of PEP, Progressive Except for Palestine, but we’re seeing that, with the growth of support for Palestinian rights within the Democratic Party, it’s becoming more and more difficult for members of Congress to credibly claim that they’re representing the progressive wing of the party while supporting legislation that enables Israel’s ongoing oppression and domination over the Palestinians. You see many, many more progressive members of Congress now stepping out on the right side of history, getting in step with the base of the Democratic Party, which now according to a Brookings Institution poll support sanctioning Israel at a 60% rate.

AARON MATE: Josh, a big part of the effort to boycott Israel includes pressuring companies that do business with Israel. What implications would this measure have on that?

JOSH RUEBNER: Well, this measure is quite broad, so even if a company requests information about a boycott or furnishes information about a boycott, they could be criminalized as well. To make this concrete and less abstract, let’s say you have a department store that gets in touch with an Israeli corporation that is based in a settlement, wanting to verify whether they’re based in an illegal settlement or if they’re based in Israel. They could conceivably be criminalized and fined under this bill as well if it becomes law.

AARON MATE: All right, Josh. Finally, we mentioned AIPAC and the influential role that they played in this. You’ve also talked about the activism though that is pushing back against efforts to silence people who support boycotts. As we wrap, can you talk about the momentum you’re seeing against this bill, especially now in light of the ACLU coming out against it?

JOSH RUEBNER: Well, I think what we’re seeing is the fact that many members of Congress who signed on to this legislation really did not understand the draconian nature of it. It seems that many of them are backpedaling off of their support. Hopefully, by the ACLU raising the red flag about its constitutionality concerns about this bill, hopefully it won’t receive a vote and certainly does not deserve to receive a vote.

AARON MATE: Josh, go answer your phone and we’ll leave it there. Josh Ruebner, policy director of the US Campaign for Palestinian Rights, author of the forthcoming book, Israel: Democracy or Apartheid State. Josh, thank you.

JOSH RUEBNER: Thank you very much.