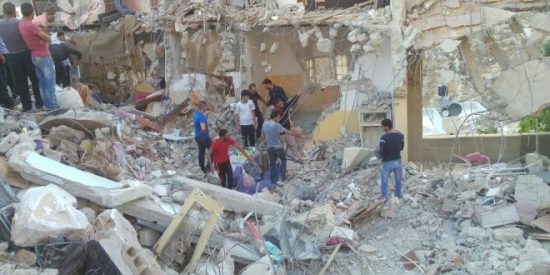 From January to June of 2016, Israeli authorities have reportedly demolished 168 dwellings in Palestinian communities across the occupied West Bank, leaving 740 people, including 384 minors, homeless, a report by B’Tselem has revealed, according to the Palestine News Network (PNN).

B’Tselem’s figures show that this six-month period alone saw more demolitions than any individual year over the past decade (with the exception of 2013, when occupation authorities demolished 175 homes).

The policy adopted by Israeli occupation authorities, vis-à-vis these communities, keeps civilians from maintaining any semblance of a normal routine, imposes a life of constant uncertainty on locals, and constitutes harassment per se, the report read.

Even those individuals whose homes were not demolished live with the constant fear that their homes might soon be demolished, regardless, and that they will be forced to leave the area they call home, the organization added.

This government policy, systematically implemented over the course of many years, constitutes the forcible transfer of Palestinians who are a protected population in an occupied territory and, as such, breaches the international humanitarian law.

According to the same source, demolitions are carried out only in what has been designated as Area C, which comprises about 60 percent of the occupied West Bank, and which Israel views as primarily meant to serve its own needs, and in annexed East Jerusalem.

Accordingly, Israel acts to establish facts on the ground so as to create a reality that would be difficult to change. The state takes action to displace and expel Palestinians citing flimsy legal pretexts. For example, one reason given for home demolition is “illegal construction” – an untenable argument given the absence of any real possibility for Palestinians to build legally.

The separation of Area C from the remainder of West Bank land helps Israel shirk its obligations to the entire Palestinian population of the occupied West Bank.

Israel instead lays the responsibility at the door of the Palestinian Authority that was supposedly given certain powers in Areas A and B. Yet, this division is entirely artificial. It does not reflect a geographic reality or Palestinian life as a whole.

The policy Israel implements in Area C impacts all West Bank residents as their future depends exclusively on Israel.

The majority of the West Bank’s land reserves and natural resources lie in Area C, so that making use of them – for expanding Palestinian communities or building factories, for agriculture, for laying water pipes or paving roads – is subject to Israeli approval, and such authorization is rarely granted.

Israel also retains exclusive control of the movement of people and goods in the West Bank, as well as of the border crossings with Israel and Jordan. It also carries on with jailing and trying thousands of Palestinians a year in its military courts, the majority of whom do not live in Area C.

Carrying out demolitions and devastating communities do not constitute implementation of “the rule of law”. Rather, these actions are a longstanding, systematic dispossession to which all Israeli authorities are party, B’Tselem’s report further read.