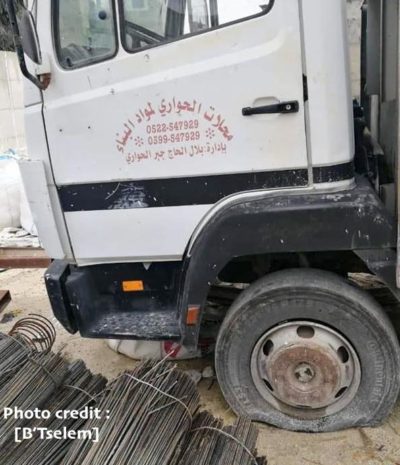 Founded in 1989, B’Tselem has “devoted itself primarily to documenting Israeli violations of Palestinians’ human rights in the West Bank (including East Jerusalem) and the Gaza Strip.”

The stated goal of the organization is “to end Israel’s occupation”, “to achieve a future that ensures human rights, democracy, liberty and equality to all people, Palestinian and Israeli alike”.

The human rights group reveals that the Palestinian homes, properties, and communities are vulnerable to such attacks, as a result of Israeli policy towards Palestinians in the West Bank. The ramifications of this ‘policy’, the group contends, is the “cumulative effect of instilling terror among the Palestinians who live under occupation”.

The following is an elaboration of the B’Tselem article, link above.

The village of al-Burj, is located southwest of the city of Hebron, in the southern West Bank, adjacent the annexation wall. The nearby Israeli settlement of Ramot, also built on Palestinian land, is considered illegal under international law.

Also, on November 23, 2018, two more Palestinian villages were vandalized, south of Nablus, in the northern West Bank. ’Asirah al-Qibliyah village residents counted 17 vehicles with slashed tires, while Huwarah village encountered 11. Citizens also noted graffiti sprayed on vehicles, fences around homes, and even the fence of a school. The Israeli settlement of Yitzhar, is situated between the two Palestinian villages. On November 25, 2018, in the al-Mughayir village, northeast of the city of Ramallah, in the central West Bank, was attacked by Israeli settlers. 4 Palestinians, before sunrise, found their cars and homes vandalized. The Israeli outpost of Adei Ad, according to Wikipedia, was built on Palestinian land, north of the village, in addition to the Israeli settlement of Shvut Rachel, Shilo, Giv’at Har’el, among others. Field researcher at B’Tselem, Ilad Hadad, spoke with the owner of the vehicle above, November 25, 2018. The following is the testimony of Mujahed Na’asan;

“My neighbor woke me up before dawn, and told me to go outside and see what the settlers had done. We all had a hard time getting back to sleep after that. We were afraid the settlers were still in the village and would hurt us. Back in July, they vandalized our car and ten others and sprayed graffiti in the same neighborhood. We filed a complaint with the DCO back then, and Israeli police officers came. But nothing has come of it. They attacked us again because they’re not worried that anyone will do anything to them. How long will this go on?”
  Northeast of Ramallah, in the central West Bank, lies Beitin village, where on December 11, 2018, citizens found that “settlers had sprayed graffiti on cars and slashed the tires of 24 cars and two trucks. 17 of the cars had all four tires slashed. The graffiti read, in Hebrew:
‘We do not sleep when the name of God is blasphemed’, and
‘I will not sleep while blood is spilt’” as the B’Tselem states.
Givat Assaf and Ofra settlements were built near the village.
  More vandalism occurred in the village of Yasuf, north of the town of Salfit, in central West Bank, on December 18, 2018. Many vehicle tires were slashed, along the main street, while many fences and cars were spray-painted with Hebrew slogans, and the local mosque had been sprayed with the Star of David. The writing, translated states :

“The people of Israel are alive”

“The people demand destruction by fire” Palestinians living in al-Gharabli – a neighborhood of Beit Hanina, in occupied East Jerusalem, on December 20, 2018, found the tires of 27 cars slashed, and the following slogans sprayed, in Hebrew, on walls of homes.

“We don’t sleep when God’s name is blasphemed”

Khirbet Susiya is a Palestinian village in the southern West Bank, south of Hebron, with Israeli settlement ‘Susiya’ located 500 meters away. Resident farmer Barakat Mor, on December 23, 2018, discovered that 110 of his olive saplings had been uprooted, presumably by Israeli settlers.