By Blaming Facebook for Palestinian Resistance, Israel Finds a New Partner in Crime 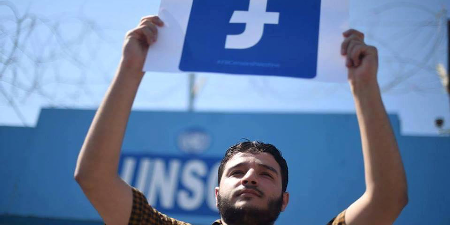 Photo: Israeli politicians, citizens and organizations have been depoliticizing the Jerusalem Intifada by chalking it up to ‘incitement’ on Facebook since it began in October 2015. Now, Facebook has partnered with the Israeli government to censor Palestinian speech.

In October 2015, just as the Jerusalem Intifada erupted, Israeli Prime Minister Benjamin Netanyahu put forth this crude analysis, saying: “what has been going on is due to the combination of Internet and Islamist extremism.” “It has been Osama Bin Laden meets [Facebook founder] Mark Zuckerberg,” he added.

More recently, in July 2016, Israeli Public Security Minister Gilad Erdan charged that “some” of the blood of the Israelis harmed in Palestinian attacks “is on Zuckerberg’s hands” because “the dialogue, the incitement, the lies of the young Palestinian generation are happening on the Facebook palatform.”

Even MK Michal Rozin of the left-wing Zionist Meretz party has joined in on the blame game. “When did [Erdan] start having a problem with Facebook?” she asks. “When we began experiencing a murderous wave of terror.”

Of course, all of these statements ignore what undergirds Palestinian resistance: the Israeli occupation, and the endless violations of Palestinian rights as well as international law that comes along with it.

But, with the help of a compliant Facebook Inc., the charge that Palestinians are motivated by Facebook posts to attack or organize against the occupation is yielding troubling results.

Now, MK Revital Swid has put in motion a bill to fine social media sites, such as Facebook and Twitter, 300,000 NIS ($77,000) per post that the government identifies as “incitement,” if Facebook doesn’t remove it within 48 hours.

Erdan and Israeli Justice Minister Ayelet Shaked (who herself has been accused of inciting violence against Palestinians on Facebook) both support the bill, which, according to the Jerusalem Post, will eventually be combined with their own Facebook censorship legislation. Their bill allows the government to seek a court order to force Facebook to remove content based on state recommendations.

But, the most recent step towards a crackdown on Palestinian Facebook speech was secured outside of the Knesset, with the cooperation of Facebook: Erdan and Shaked reached an agreement with Facebook to work together to “monitor” content on September 12, 2016.

“Our main aim is for those companies to do their own monitoring of material containing incitement,” Shaked said of the meeting later that day.

Glen Greenwald wrote of the recent agreement: “Facebook appears eager to appease those threats by working directly with the Israeli government to determine what content should be censored.” “The joint Facebook-Israel censorship efforts… will be directed at Arabs, Muslims, and Palestinians who oppose Israeli occupation,” he warned.

The suspension of seven Palestinian journalists’ Facebook accounts in September supports Greenwald’s claims. Last Friday, Facebook disabled the accounts of journalists responsible for the pages of two of the most widely circulated Palestinian news dailies on the web, only to announce that doing so had been a mistake the next day.

Palestinian activists have been mobilizing to challenge Israel’s crackdown on Facebook and Palestinian free speech since the unexplained account suspensions.

On September 19th 2016, activists called for a boycott of Facebook, citing the recent “censorship agreement between Facebook and the Israeli government.” The hash tag #FacebookCensorsPalestine quickly spread on Twitter.

“The concern is that Facebook is adopting Israeli policy and terminology when it comes to defining what incitement is,” Nadim Nashif, cofounder of 7amleh, the Arab Centre for the Advancement of Social Media, explained to Al Jazeera.

Since October 2015, there have been at least 200 arrests of Palestinians for alleged incitement, “a new phenomenon,” according to Addameer, that coincides with the onset Jerusalem Intifada. Most of the Palestinians arrested for social media activity are taken without charges or trial via administrative detention orders.

Activists behind the Facebook Censors Palestine campaign also raised concern that Facebook is providing Israeli authorities with users’ information to carry out arrests.

“Effectively,” Addameer writes, “Palestinians are being arrested, silenced and prosecuted for expressing anger and frustration against the protracted Israeli occupation that regularly violates their human rights.”

But, Israeli citizens as well as government-linked Israeli organizations have in many ways been spearheading – or at least are in step with – the government’s efforts to pressure Facebook to crackdown on Palestinian speech.

In October 2015, Micah Avni and his now deceased father Richard Lakin, who was shot that month by two Palestinians in Jerusalem, filed a class action lawsuit against Facebook in New York with the help of Israeli legal organization Shurat HaDin. Another 20,000 other Israelis, recruited by a Shurat Hadin campaign called “Disconnecting Terror,” joined Lakin as plaintiffs in the case.

In the lawsuit summons, Shurat HaDin argues that Facebook must “stop allowing Palestinian terrorists to incite violent attacks against Israelis on its Internet platform.”

Nitsana Darash-Leitner, the director of Shurat Hadin, explained her objective in the case to the Jerusalem Post. Like Shaked, Darash-Leitner hopes to force Facebook into taking an “active role” in censoring content, rather than only doing so once a third party (such as the Israeli government) requests it to do so.

On July 11th 2016, the organization filed a second lawsuit against Facebook in New York, this time, seeking monetary compensation to the tune of $1 billion. Lakin is a plaintiff in the case once again, along with four other American and American-Israeli families that were harmed in Palestinian attacks.

Shurat HaDin, which describes itself as a “Jewish legal rights institute,” accepts direction on which civil suits to pursue and even “receives evidence” from Israel’s national espionage agency Mossad and National Security Council, according to U.S. embassy cables leaked by Chelsea Manning, published by WikiLeaks, and reported on by the Electronic Intifada.

Both cases are expected to be difficult for Shurat HaDin to win. Nevertheless, the concurrent mobilization of Jewish Israelis, a government-linked organization, and the Israeli government itself around the shared goal of strong-arming Facebook into adopting Israel’s racialized double-standard when it comes to free speech reflects the already unjust, asymmetrical political currency given to Palestinian versus Israeli speech.

While Palestinians cannot post a status critical of the power that occupies them without fear of it disappearing, the account being disabled, or the sound of quickly approaching sirens, Israelis are not only able to voice grievances in a political arena that they are citizens of, but also to openly lobby for and receive government and extra-governmental support towards developing new mechanisms to collectively punish Palestinians.