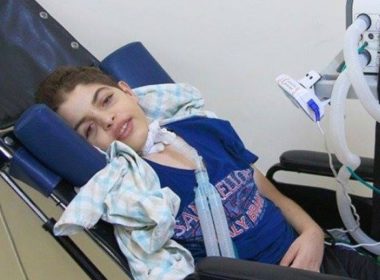 Palestinian medical sources have reported, Saturday, that a child died from serious wounds he suffered after the army fired a missile at his home, during the Israeli war in the Gaza Strip, in the summer of 2014.

The Al-Wafa’ Rehabilitation Hospital said the child, Mohammad Nasr al-Reefy, 14, was seriously injured, on August 21, 2014, with injuries and shrapnel all over his body, including a piece in his spine, resulting in quadriplegia and various health complications.

The child was injured mainly in his neck and head when the Israeli army fired a missile at the family’s farmland, in the Tuffah neighborhood, in Gaza city.

The Al-Mezan Center for Human Rights reported at the time that, on Thursday morning August 21st, 2014, an Israeli war jet fired a missile toward farmland owned by ar-Reefy family, near the an-Nafaq Street, north of Gaza city, killing five members of the family, including three children, and wounding four, including two children, identified as Maram ar-Reefi, and Ziad Tareq ar-Reefy, 9, who later died from his wounds.

The Al-Mezan Center for Human Rights said the soldiers killed at least 2218 Palestinians during the 51-day Israeli offensive on the coastal region, while dozens later died from their serious wounds. Around 84% of the slain Palestinians were civilians, including hundreds of children. Al-Mezan stated that the Israeli bombardment and shelling of Palestinian homes, residential buildings and structures, resulted in wiping out entire families, while dozens of families lost multiple members. According to UN OCHA, 142 families lost 3 members or more in the Israeli attacks.