Child, Who Was Assaulted And Abducted By 23 Israeli Soldiers, Released 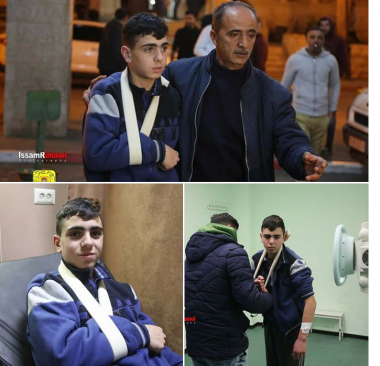 The Israeli Authorities released, on Wednesday at dawn, a Palestinian child, who was abducted and assaulted by 23 Israeli soldiers, earlier this month, and was instantly moved to a hospital for treatment.

Media sources in Ramallah said the soldiers released Fawzi Mohammad al-Juneidi, 16, who was held in Ofer military base and detention center, west of the central West Bank city of Ramallah.

Fawzi, from the southern West Bank city of Hebron, was rushed to Palestine Medical Complex, in Ramallah, for specialized treatment for a fracture in his shoulder.

Al-Juneidi, who was assaulted and abducted on December 7th, told WAFA Palestinian News Agency that, after the soldiers attacked him, he was moved to Etzion military base, north of Hebron, where he spent the night being interrogated and tortured by the soldiers and interrogators.

He added that his release came after his family paid 10.000 Israeli Shekels fine to the Israeli Authorities.