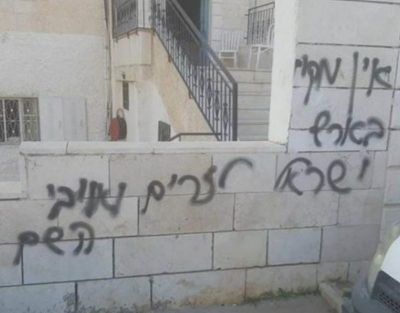 A group of fanatic Israeli colonizers invaded, on Monday at dawn, the town of Hizma, northeast of occupied East Jerusalem, and wrote racist graffiti on cars and walls, in addition to puncturing tires of many cars, and attempted to break into homes.

She added that the colonizers were stopped by the residents, and were unable to invade the properties, and instead slashed tires of four parked cars, and wrote racist graffiti on some cars and walls.

It is worth mentioning that the attacked homes and cars are in an area that has been isolated from the rest of town by the illegal Israeli Annexation Wall.

In related news, dozens of soldiers invaded the town, and abducted five Palestinians, including a child, only ten years of age. They were among at least thirteen Palestinians, including children, who were taken prisoner from their homes in several parts of the occupied West Bank.

On Monday morning, the soldiers fired gas bombs at many schoolchildren in a secondary school in Teqoua’ town, east of the West Bank city of Bethlehem.