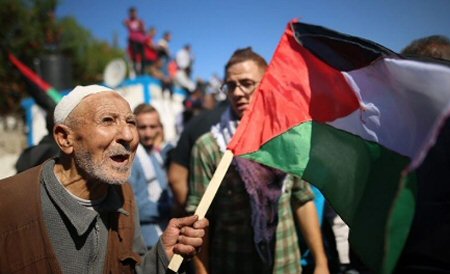 Rallies were held in Ramallah, Nablus, Tulkarem, Bethlehem, and Hebron, during which political leaders spoke to the crowds about the impact of the US decision on the ground, and promising to fight this declaration at the local and international levels.

Following the rallies, dozens of people marched to Israeli army checkpoints at the entrances to the cities where they faced Israeli soldiers, according to witnesses.

Confrontations were reported at the northern entrance to Ramallah and Al-Bireh city, after Israeli soldiers showered dozens of people, there, with teargas canisters and rubber-coated metal bullets. Medical sources said one person was shot in the leg by a live bullet and rushed to hospital in Ramallah. Several suffocation cases were reported but treated on location.

Similar scenarios were reported to the north of Hebron and at the city’s contact points in the old town. Two people were reportedly lightly injured by rubber-coated bullets.

Palestinians also burnt tires and threw rocks at soldiers manning metal gates at the separation barrier in Qalqilia, in the north of the West Bank.

The Israeli army sent reinforcements into the West Bank today, in anticipation of outbreak of clashes as part of the activities, WAFA correspondence reported.