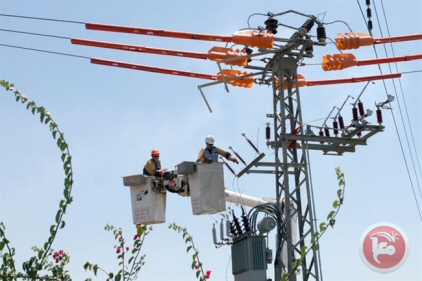 Israel authorities said, Wednesday, that they would temporarily stop cutting power to the occupied West Bank, after an agreement was reached with the Palestinian Authority to begin negotiations on the payment of electricity bills.

Hisham al-Omari, the head of the Jerusalem District Electricity Company (JDECO) — the Palestinian power company — told Ma’an News Agency that there would be no power cuts over a two-week period while “marathon negotiations” took place.

He said JDECO would also pay 60 million shekels ($15.7 million) to the Israeli Electric Corporation (IEC) by next Tuesday as part of the agreement.

The negotiations will attempt to resolve disputes over tariffs and interest rates for both past and future electric bills, al-Omari said, adding that the exact amount of debt owed by the Palestinians to the IEC has long been a point of dispute.

The agreement came hours before the IEC said it would cut power to a number of areas in Bethlehem district for a number of hours on Wednesday, before cutting power to Ramallah district villages on Thursday.

Over the past week, the IEC has cut the power supply to major West Bank cities, including Jericho, Hebron, and Bethlehem, due to the PA’s mounting debt.

Al-Omari said the cuts are intended to place pressure on the PA to pay the debt, but said earlier this week the move amounted to “collective punishment.”

“It affects all the people, whether they have paid their bills or not,” he said. “The power cuts won’t bring any solution to what is a political issue.”

The Israeli authorities have in the past withheld tax revenues collected on behalf of the PA over unpaid bills owed to Israeli companies.

Israel, last year, threatened to deduct over 1 billion shekels from taxes withheld from the PA in order to cover missed electricity bills.

Palestinian Prime Minister Rami Hamdallah, at the time, rejected responsibility for the bills, which he said fell under the jurisdiction of “municipalities and electricity distribution companies.”

World Bank Director for West Bank and Gaza, in April of 2015, advised the PA to put more effort into reducing non-payment of electricity bills while recommending the IEC cooperate with its Palestinian counterparts in order to develop payment plans.