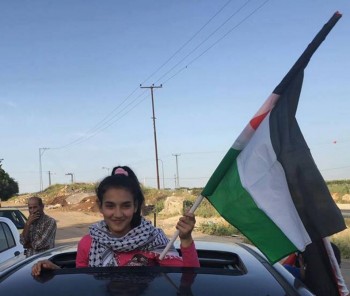 The Israeli Authorities released, Sunday, the youngest Palestinian detainee, Deema al-Wawi, only twelve years of age, after holding her captive, in direct violation of International, for more than two and a half months.

On February 9 2016, Deema al-Wawi, from Halhoul town, north of the southern West Bank city of Hebron, was kidnapped at a military roadblock near Karmie Tzur illegal colony, built on Palestinian lands, after the soldiers claimed that “she had a knife in her bag.”

Tulkarem governor, Essam Abu Bakr, the head of the Detainees Committee Issa Qaraqe’, and hundreds of Palestinians, including former political prisoners, welcomed the released child along with her family.

Abu Bakr said the abduction and imprisonment of children is a crime against humanity, and a testimony to the criminal nature of the Israeli occupation and its constant abuse of children in Palestine.

On his part, Qaraqe’ said that “Israel is a criminal country that practices ugly, and most brutal forms of torture and oppression against children and childhood in occupied Palestine.”

“This occupation constantly violates International Law and every basic human rights principle,” Qaraqe’ said, “Israel is still holding captive more than 450 children, under the age of 16.”

It is worth mentioning that the Israeli military court in Ofer Prison, in the occupied West Bank, sentenced Deema to four and a half months, and 8000 Israeli Shekels fine. “This Israeli occupation is criminal and vicious; it still holds captive more than 400 children, in direct violation of International Law, and all related human rights agreements,” Dr, Barghouthi said, “The Palestinians will remain steadfast, and will never surrender – our struggle continues until liberation and independence.”

On Sunday evening, the soldiers kidnapped former political prisoner, Palestinian Professor and Astronomer Emad al-Barghouthi, 53, after stopping him at a military roadblock installed on the main road leading to Nabi Saleh village, west of Ramallah.

Al-Barghouthi, from Beit Rima town near Ramallah, teaches physics at the Al-Quds University.