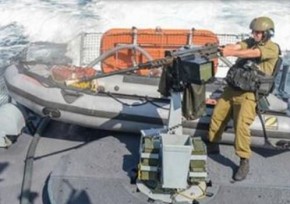 Israeli navy ships opened fire, earlier Monday, on a number of Palestinian fishing boats in Gaza waters, in the northern part of the coastal region.

The fishers had to sail back to shore in order to avoid further assaults and violations; the attack led to property damage but no injuries.

On April 3, Israel unilaterally decided to extend the fishing zone, off some parts of the Gaza coast, to nine miles, instead of six.

The areas, where the fishing zone was increased, extend from Wadi Gaza, west of Gaza city, until the western part of Rafah, in the southern part of the coastal region.

Israel frequently and unilaterally reduced it to six, then three, and to six again, before eventually increasing it, in certain areas, to nine nautical miles.

Under the Oslo agreements, the Palestinians are supposed to be able to fish and sail within twenty nautical miles, but Israel kept unilaterally decreasing it.