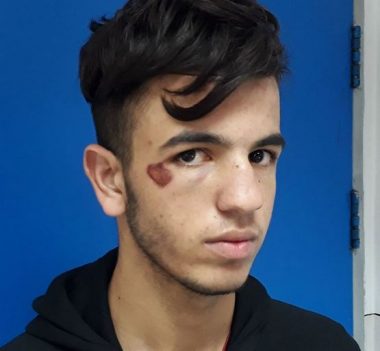 The Israeli police released, on Sunday evening, a Palestinian teenager from the al-‘Isawiya town, in occupied East Jerusalem, after he was interrogated and tortured, under suspicion of throwing Molotov cocktails and stones at army jeeps.

The Palestinian, Mohammad Abdul-Raouf Mahmoud, 18, told the Wadi Hilweh Information Center in Silwan (Silwanic) that the officers and interrogators tortured him in al-Maskobiyya prison.

He added that the soldiers also placed him in a waiting cell, after a court hearing this past Friday, before one of them entered it, and started kicking and punching him on several parts of his body, including his face and head, until he lost consciousness.

The soldiers then poured water on him, but he remained unconscious, and was later transferred to Hadassah Ein Karem hospital, in Jerusalem.

The child was abducted by the soldiers, on Thursday evening, while he was walking in a neighborhood in his town, and was sent to court, Friday, facing allegations of throwing stones and Molotov cocktails at army jeeps, but a court ordered his immediate release, Sunday.

|Many Palestinians Suffer The Effects Of Teargas Inhalation Near Jenin|