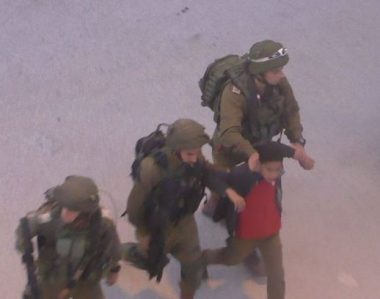 Israeli soldiers abducted, on Monday evening, a Palestinian child, who was playing with several other children, in the at-Thaher area, in Beit Ummar town, north of the southern West Bank city of Hebron.

The soldiers invaded the area, and fired many rubber-coated steel bullets at a group of children there, reportedly after they hurled stones at them, and abducted Khaled Raed Bahar, 14.

Eyewitnesses said there were no clashes with the army, and that the soldiers ordered the child to stop, while he was walking near a house, they invaded earlier, and occupied its rooftop.

The child’s family, and many Palestinians, tried to speak to the soldiers to secure his release, but the soldiers placed him in a jeep and took him to Karmie Tzur nearby illegal colony, and later moved him to an unknown destination.