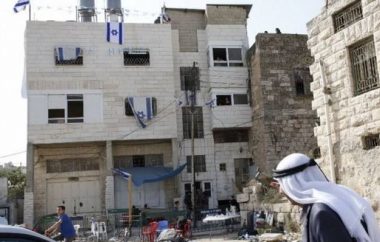 The Israeli “Civil Administration Office,” run by the army in the occupied West Bank, has approved the construction of 31 colonialist units, for Jewish settlers, in the old Central Bus Station, in the Shuhada Street, in the southern West Bank city of Hebron.

The approval is the largest construction plan in Hebron since 2002, when the then Israeli Prime Minister Ariel Sharon approved the construction of ten units in Tal Romeida.

Local Engineer, Issa Amro, of the Youth Coalition Against Colonies in Hebron, said the approval is a continuation of Israel’s illegal and racist policies of segregation and theft of Palestinian lands, and added that it would lead to an increase in the attacks, carried out by the colonists against the indigenous Palestinians.

Amro added that the Palestinians in Hebron face numerous daily violations, roadblocks and closures, while this new colony would isolate more areas in city, besides the already closed Shuhada Street, with its many markets and stores that were forced to shut down, and will lead to isolate more homes and stores.

He also stated that the new colony would lead to a %20 increase of the number of colonies who live in Hebron city, in addition to the destruction of Palestinian property, and the Old City’s historic and archeological heritage.

Amro said that the new colonialist plan also violates the UNESCO decision, which listed Hebron’s Old City among the protected world heritage sites, and should be under international standards that would protect it and its history.

It is worth mentioning that Israel illegal confiscated the Central Bus Station, in the heart of the Shuhada Street in Hebron, in the late 1980’s, and used it as a military base.