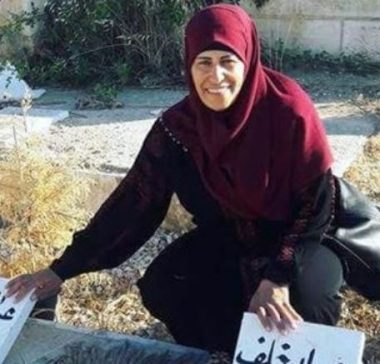 The family of Bothaina Shamasna, 48, the detained mother of a Palestinian who was killed by the Israeli army on October 12, 2015, has been holding a hunger strike for the seventh consecutive day, protesting being held under very difficult conditions, and torture inflicted on her and her child, Sara, 14.

Shamasna’s daughter, Fatima, said that her mother informed the family during her court session Sunday, that she declared hunger strike seven days ago, protesting being held in a very small cell, and the torture she was subjected to along with her detained daughter, Sarah, only 14 years of age.

Fatima added that her sister Sarah was transferred to an Israeli hospital, where she received treatment for four days, after being tortured by the soldiers during interrogation, especially when they hit her in her throat and neck.

She also said that her mother showed clear signs of torture, such as cuts and bruises, mainly on her arms and hands.

Representing the mother and her daughter, lawyer Ismael Taweel, said that the woman was abducted by the soldiers after her son’s funeral, and was interrogated for carrying a weapon during the ceremony, but the army released her later.

In January of this year, the soldiers abducted Raseela and her daughter Sara, from their home in Qotna town, west of Jerusalem.

Mohammad Shamasna, 23, was killed on October 12, 2015, when the army claimed he tried to snatch a weapon from a soldier, before an Israel settler shot and killed him.