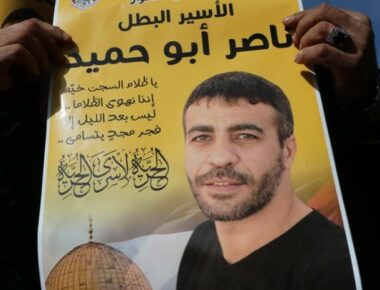 The Palestinian Prisoners’ Society (PPS) has reported that a cancer-ridden Palestinian detainee imprisoned by Israel was transferred from the Ramla prison clinic to Tal HaShomer Israeli medical center due to his serious health condition.

The PPS said the detainee, Nasser Mohammad Abu Hmeid, 50, suffered a serious health setback due to the lack of professional medical treatment.

In August of 2021, after complaints of severe chest pain, Abu Hmeid was diagnosed with lung cancer, and on October 19, 2021, he underwent surgery to remove a lung tumor that was 10 cm in diameter.

He was transferred back to Ashkelon prison and later began chemotherapy, leaving him at an elevated risk for recurrent infections.

After the doctors said he needed chemotherapy, the Israeli Prison Authority delayed his access to the treatment before receiving the first dose.

Abu Hmeid, from the Al-Amari camp, east of Ramallah, in the central occupied West Bank, was detained in 2002 and sentenced to seven life sentences plus 50 years.

Furthermore, the family home has been demolished five times, four of his brothers are in Israeli prisons, while a fifth brother was shot dead by soldiers in 1994.