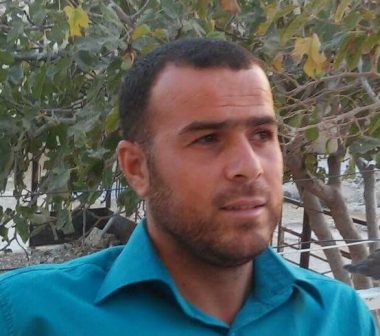 The Palestinian Prisoners’ Society (PPS) has reported that a Palestinian detainee, held by Israeli under arbitrary Administrative Detention orders without charges or trial, in ongoing with a hunger strike, he started five days ago.

The PPS said that detainee Ayyoub Yacoub al-‘Asa, 33, from the al-Obeydiyya town Bethlehem, was moved to a solitary confinement, in Ofer Israeli prison, the day he started his strike.

It added that the detainee was abducted by the army on June 21, 2017, and received an Administrative Detention order for six months, and was then slapped with a similar order, without charges or trial.

Al-‘Asa is a married father of three, and was previously abducted and imprisoned by Israel for five years, for his support to the Islamic Jihad movement in Palestine.

It is worth mentioning that hundreds of detainees spent years under these orders, especially since Israeli claims having “secret files” against them, while neither the detainees, nor their lawyers, have access to these alleged files.