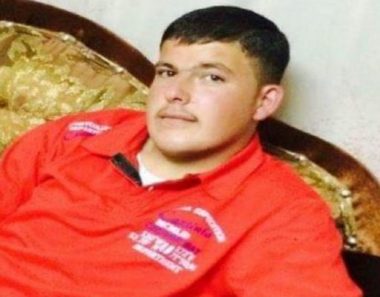 A Palestinian political prisoner at the Ramon Israeli prison was forced into solitary confinement, on Wednesday at night, when he threw boiling water at a soldier after the guards attacked many detainees.

The detainee, Malek Ahmad Hamed, 23, from Silwad town, northeast of the central West Bank city of Ramallah, was attacked by several soldiers before he was placed in solitary confinement.

The Palestinian Prisoners’ Society (PPS) has reported that Hamed had an argument with one of the soldiers, before throwing a pot with boiling water at him, after the detainees received the news of the death of Fares Baroud, a political prisoner from Gaza, who died after being denied the needed specialized medical treatment.

The PPS stated that Hamed was residing in the same room with Baroud and several other detainees, before Baroud was moved to Soroka Israeli medical center, where he died shortly after being transferred from prison.

It added that Baroud, who died after being held by Israel for 28 years, was subject to medical neglect, in addition to numerous violations, including being held in solitary confinement for several years.

The PPS held Israel fully responsible for the live of Hamed, and all detainees in its prisons, detention and interrogation center, especially since they are subject to constant violations.

It stated that protests, and confrontations between the detainees and the soldiers, are a natural outcome of these serious violations.

It is worth mentioning that Hamed was taken prisoner in April of 2017 and was sentenced to two life terms and a 280.000 Shekels fine, while the army also demolished his family’s home, after accusing him of killing one soldier in a car ramming attack near Ofra illegal colony, which was built on Palestinian lands in Ramallah governorate.