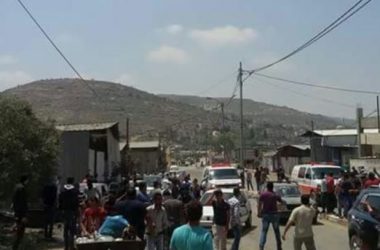 Israeli soldiers attacked, Friday, hundreds of Palestinians in various parts of the occupied West Bank, , causing dozens of injuries, during processions in solidarity with the hunger striking detainees, held by Israel.

Medical sources in Hebron, in the southern part of the West Bank, have reported that the soldiers shot two young men with live fire in their legs, during clashes that took place in Beit Ummar town, north of the city, after the soldiers used excessive force against dozens of residents marching in solidarity with the detainees.

The head of the Detainees’ Committee in Beit Ummar, Ali Ayyad Awad, said the soldiers fired many live rounds at the protesters, wounding two in their legs.

He added that the procession started following noon prayers, and just before the protesters reached a military roadblock, the soldiers started firing gas bombs, live rounds and concussion grenades.

The soldiers also attacked protesters in Beita town, south of the northern West Bank city of Nablus, wounding twenty-eight Palestinians; eight of them were moved to local hospitals and clinics. Among the wounded are three medics.

In related news, the soldiers attacked the weekly nonviolent protest against the Annexation Wall and colonies in Bil’in village, near Ramallah, and abducted the head of the Local Council Bassem Mansour, and the vice-head Ahmad Abu Rahma.

In a post on his Facebook page, Ahmad said the soldiers released him later,  while Bassel was taken to an unknown destination.

The attack took place after the soldiers assaulted locals, Israeli and international peace activists, marching in solidarity with the detainees, calling for national unity and the release of all detainees, and for ongoing resistance until liberation and independence.