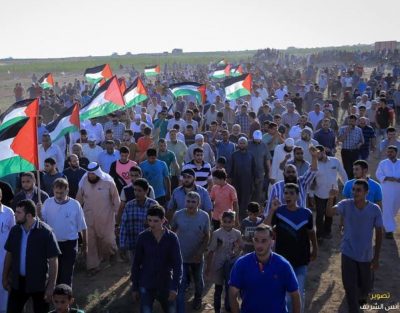 Dr. Ashraf al-Qedra, the spokesperson of the Health Ministry in Gaza, has confirmed that Israeli soldiers killed, Friday, two Palestinians, including a child, and injured 415 others, including 11 children, two women and three medics, in the “Great Return March” processions along the eastern parts of the Gaza Strip.

Dr. al-Qedra said the soldiers killed Mohammad Fawzi Mohammad al-Hamayda, 24, after shooting his with live rounds in the abdomen and his leg, east of Rafah, in the southern part of the Gaza Strip.

He added that the soldiers killed a child, identified as Yasser Amjad Abu Naja, 14, east of Khan Younis, also in the southern part of the Gaza Strip.

The official also said that the soldiers injured more than 415 Palestinians, including 136 who were moved to hospitals for further treatment, and 279 who received treatment in field clinics.

Three of the wounded Palestinians suffered life-threatening injuries and are still in serious conditions.

The Israeli army started firing at the protesters after dozens of young men burnt tires near the border fence, along the eastern parts of the Gaza Strip, and launched balloons carrying the colors of the Palestinian flags, and pictures of Palestinians who were killed by the army since the protests started on Land Day, on March 30th, 2018.

Friday’s protest, part of ongoing processions for the fourteenth consecutive week, was dubbed “From Gaza to the West Bank, one fate, one blood,” expressing rejection to any attempt to isolate the Gaza Strip, and consider it a separate entity from the rest of occupied Palestine.

The army attacked the protesters in border areas across the eastern side of the coastal region, from areas east of Rafah and Khan Younis, in the southern part of the Gaza Strip, to Gaza city, Deir al-Balah in Central Gaza, in addition to Beit Hanoun and Beit Lahia, in the northern part.

It is worth mentioning that a local folk-dance troupe (Dabka) danced to Palestinian and Arab music, expressing the steadfastness and determination to continue the struggle until achieve the internationally guaranteed legitimate rights of the Palestinian people of liberation, independence and sovereignty.