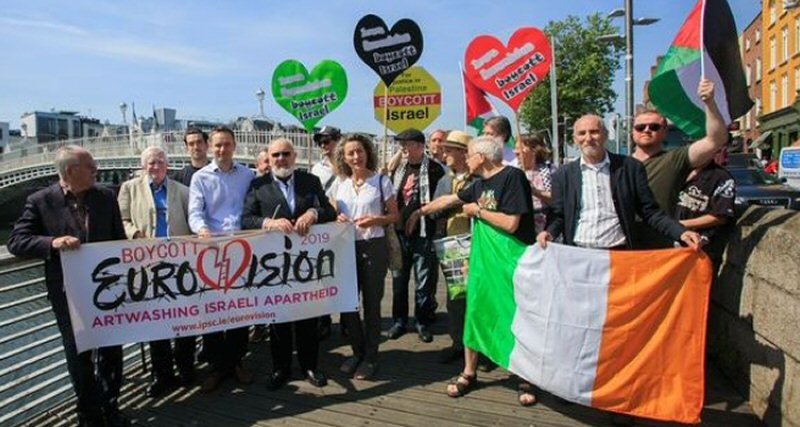 (L to R) Celebrities, public figures & activists at Dublin’s Ha’penny Bridge during a launch of the Irish Call to Boycott Eurovision 2019 in Israel on June 27, 2018 (Image: Collins)

The Irish Campaign to Boycott the 2019 Eurovision, in Israel, welcomes the motion passed by the Dublin Broadcasting Branch of the National Union of Journalists (NUJ) on January 29th ,whereby it states it “will support any member, working in RTÉ or elsewhere, who chooses to exercise a conscientious objection towards involvement in coverage of the song contest.”

The motion was passed by a large majority and represents a recognition that the Eurovision contest in Israel presents serious ethical issues for anyone who cares about human rights.  Palestine News Network welcomes this support for workers choosing not to participate in coverage of the contest, either in Israel or in Ireland, as they do also with the Director General of RTÉ, Ireland’s National Broadcaster, Dee Forbes’ commitment, last year, not to sanction any workers whose consciences prevented them from travelling to Israel.

NUJ Dublin Broadcasting Branch Chair broadcaster Emma O’Kelly said, “The fact that the Eurovision is taking place this year in a country guilty of ongoing serious human rights abuses, including against journalists, means there will be members of ours who feel that for ethical reasons they can’t participate in coverage of the contest. We debated our attitude towards this [last] week and the branch decided by a very strong majority to express our willingness to support any member in that position.

“We were also mindful of the fact that our sister union, The Palestinian Journalists Syndicate, is among a number of Palestinian organisations that have appealed to the world to not treat this year’s contest as just ‘any other Eurovision’.”

The Irish Campaign to Boycott the Eurovision in 2019 reiterated the call for RTÉ and any performers not to participate in the song contest in Israel.

“Further, we ask RTÉ to support the call from the Palestine Liberation Organisation (PLO) and the Palestinian Journalists’ Syndicate not to broadcast the Eurovision Song Contest in Israel’s illegal settlements, including those in occupied East Jerusalem; the least RTÉ should do to be in line with international law and European policy,” IPSC said in a statement.

The campaign to boycott the Eurovision in apartheid Israel enjoys widespread support in Ireland with almost 15,000 people signing a petition calling for non participation and also has endorsement from human rights activists, artists and other public figures, among them former Eurovision winner Charlie McGettigan; Irish broadcaster and former Eurovision commentator Mike Murphy; and former Eurovision presenters Carrie Crowley and Doireann Ni Bhriain. The Musicians’ Union of Ireland (MUI) and Irish Equity, have also endorsed the campaign.

Internationally hundreds of artists have joined the call to boycott the Eurovision in Israel, almost 40,000 people have signed a petition calling on members of the European Broadcasting Union to withdraw from the contest,  and on January 29th more than 60 queer and trans liberation organizations from nearly 20 countries across Europe and beyond made a call on global LGBTQIA communities to boycott the competition.

While Israel continues to deny the Palestinian people their rights, people of conscience must continue to refuse to engage with that state and to support the call from Palestinians for solidarity by boycotting Eurovision 2019. To do so is to be on the right side of history.