Dutch Member of Parliament Refuses to Shake Hands with Netanyahu 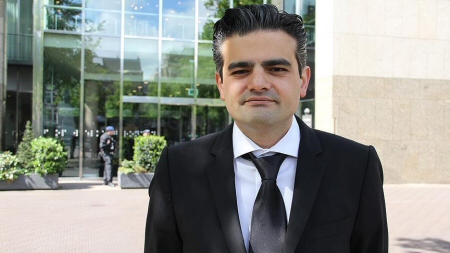 Dutch lawmaker of Turkish origin, Taunahan Kuzu, refused to shake hands with Israeli Prime Minister Benjamin Netanyahu during his visit to the Netherlands Parliament, on Wednesday.

Kuzu, who wore the Palestinian flag lapel pin on his chest, chose to put his hand on his chest instead of shaking hands with Netanyahu.

Netanyahu said, according to Al Ray: “Today we saw a clear example of who wants peace and who doesn’t want it. I will proudly continue to present the Israeli position throughout the world, and I will continue to promote  Israel internationally.”

In his speech to the Dutch Parliament members, Netanyahu claimed that Israel doesn’t only defend itself but also Europe, and that it is the sole state which achieves “stability” in the Middle East.

He also claimed that the source of conflict between Palestinians and Israel are not Israeli settlements, but the Palestinians ‘ stubborn refusal to recognize Israel as a state for the Jewish people.

Netanyahu concluded his official visit to the Netherlands yesterday, after meeting the Dutch prime minister, the head of the parliament and the president of the senate.