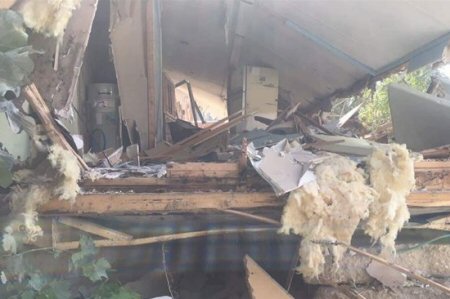 A Palestinian was forced to demolish his own home, on Monday, in the Beit Hanina neighborhood of occupied East Jerusalem, after receiving demolition threats from the Jerusalem municipality.

Ayman Naim Kawasbeh told Ma’an News Agency that he removed furniture and other belongings, and proceeded to demolish the home in which he had lived, along with his wife and six children, for a decade. The youngest child is three years old, while the oldest is 17.

Kawasbeh said that he received a demolition order from the Jerusalem municipality, warning that he will end up paying exorbitant fees that would amount up to 40,000 shekels ($11,035), if the municipality demolishes the house. Therefore, he decided to carry out the demolition on his own.

The demolition order was delivered to Kawasbeh under the pretext that his house was built without the difficult-to-obtain Israeli permit.

Kawasbeh mentioned that he had previously attempted to obtain an Israeli building permit and was able to delay the demolition. However, Israeli authorities did not grant him a permit and delivered a demolition order instead.

Kawasbeh stressed: “We live a real-life tragedy. Winter is around the corner and we have no home, no shelter. I don’t know what i will do in the upcoming days.”

Israel rarely grants Palestinians permits to build in East Jerusalem, though the Jerusalem municipality has claimed that, compared to the Jewish population, they receive a disproportionately low number of permit applications from Palestinian communities, which also see high approval ratings.

The report said that the cumulative number of structures targeted so far in 2018 (251) has remained below the figure in the equivalent period of 2017 (286). All of the incidents during July took place on grounds of lack of building permits.