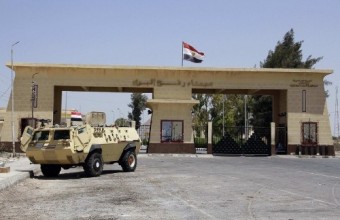 nsnbc : Egypt opens the Rafah border crossing between Egypt’s Sinai and the Palestinian Gaza Strip on Wednesday and Thursday to allow stranded Palestinians and Egyptians to cross the border.

Egyptian authorities responded to directives from President Abdel Fatah al-Sisi who decided to open the Rafah border crossing on Wednesday, 29/6/2016, and Thursday, 30/6/2016.

The decision was made to allow the movement of stranded people and humanitarian cases on both sides and within the context of easing the suffering of Gaza residents with the advent of Lesser Bairam.

The Egyptian administration of President Abdel Fatah al-Sisi repeatedly noted that Egypt would like to normalize the opening of the Rafah border crossing between Egypt and the coastal Palestinian enclave.

In 2015 al-Sisi and the Palestinian Authority reached an agreement on normalizing the opening of the Rafah border crossing. Al-Sisi stated that Egypt had agreed to training Palestinian border guards.

The Palestinian Authority government in Ramallah for its part, said that the agreement would result in the opening of the Rafah border crossing while bypassing territory controlled by Hamas.

Senior Palestinian diplomat and aide to Palestinian Authority (PA) President Mahmoud Abbas, Azzam al-Ahmad, told the press in November 2015 that an agreement had recently been reached in the Egyptian capital Cairo.

Al-Ahmad said that the agreement aimed at opening the Rafah border crossing to the maximum extend possible to allow students, laborers, medical patients as well as commercial goods through the border.

An implementation of the agreement would have broken years of Israel’s blockade against the coastal Palestinian enclave while it would take the wind out of the sails of elements within Hamas who have been involved in the insurgency in Egypt’s North Sinai province after the ouster of the Muslim Brotherhood linked Egyptian president Mohamed Morsi in 2013.

Hamas, for its part,  reviewed the agreement with skepticism, raising questions about the viability of its implementation.

Senior Hamas official Ghazi Hamad said that Hamas had not been officially informed about the agreement through the appropriate channels, indicating that Hamas was likely to oppose it.

Al-Azzam, for his part, commented on the point, saying that Hamas would have to answer to the people of Gaza if it opposed the agreement and to explain to them why it opposed an agreement that could break years of siege on Gaza.

The continued impasse between the Al-Fateh dominated Palestinian Authority (PA) and Hamas has thus far prevented the implementation of the agreement, of which the control of the Palestinian side of the border by Palestinian government officials is the main issue.

As long as this impasse continues, it will be the residents of the Gaza Strip who will have to rely on goods smuggled through tunnels and the control over their lives and economy by rivaling factions and Mafia-like black-market structures.