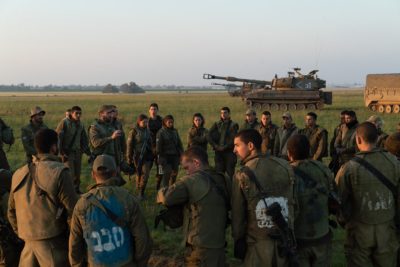 The Israeli government authorized even more troops and weaponry to be deployed to the Gaza-Israel border on Wednesday evening, as Palestinians in Gaza prepare for the one-year anniversary of the weekly protest movement known as the ‘Great March of Return’ on Saturday.

Meanwhile, Egyptian officials crossed the Erez border crossing from Israel into Gaza to work on negotiating a truce. Palestinian officials from every major faction have repeatedly stated their desire for a truce, but the Israeli government has not responded to the overtures for peace.

Palestinian Prime Minister Ismail Haniyya, whose office was bombed into rubble on Monday night by Israeli bombs dropped by F16 fighter jets, made his first public appearance since the attack, on Wednesday evening. He said that the Palestinian resistance had made clear their intentions for peace, and that “The Occupying Power [Israel] has heard the message.” Now, he said, it is up to Israel to decide if they will go the way of war or peace.

The Egyptian officials are scheduled to be in Gaza overnight until Thursday. Israeli bombings, drone strikes, sound bombs and other weapons continue to be dropped on the Gaza Strip by the Israeli airforce.

The negotiators are from the Egyptian General Intelligence Service. They are said to have met with Israeli officials on Monday night, and had claimed at that time that a ceasefire was imminent – but Israeli bombardment continued without abatement through Tuesday and continuing into Wednesday.

On Friday, the weekly non-violent protest at the border between Gaza and Israel is scheduled to take place, and then on Saturday, Palestinians across Gaza, the West Bank and around the world will commemorate Palestinian Land Day with massive protests against Israeli land confiscation, imprisonment of the Gaza Strip and illegal and wanton use of military force against civilian populations.

Palestinian Land Day marks the anniversary of a non-violent protest in 1976, following the Israeli government’s seizure of thousands of acres of Palestinian land to annex for the Jewish state.

At that time, protests against the land confiscation were also met by deadly force imposed by the Israeli police, who killed six unarmed Palestinian protesters.

Since the Great March of Return began on March 30th, 2019, over 240 Palestinians have been killed, and over 28,000 wounded by Israeli forces.