Erekat: “Only Alternative to Israeli Apartheid is a Secular One-State Solution” 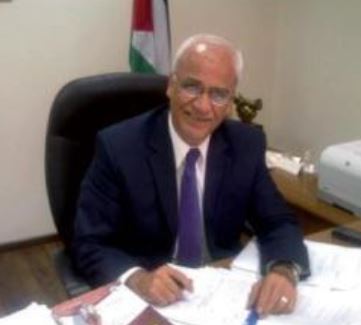 Erekat stressed that the acceptance of a two-State solution by the Palestine Liberation Organization (PLO), in fact, represents a painful and historic Palestinian compromise of recognizing Israel over 78% of historic Palestine.

Contrary to (Israeli Prime Minister) Netanyahu’s plan of one state and two systems, Apartheid, the only alternative to two sovereign and democratic states on the 1967 border is one single secular and democratic state with equal rights for everyone, Christians, Muslims, and Jews, on all of historic Palestine. … I urged Mr. Bercow to work towards justice for the Palestinian people, especially given the historic responsibility that the UK bears 100 years after the issuance of the Balfour Declaration. Calls by Prime Minister Theresa May to celebrate the anniversary of the Balfour Declaration are not only unacceptable but insulting to the Palestinian people. We called upon the United Kingdom to recognize the State of Palestine on the 1967 border with East Jerusalem as its capital, and to take concrete measures in order to save the two-state solution, including to ban all Israeli settlement products.

Viewed in a historical context, the Balfour Declaration and the Sykes – Picot agreement show that sovereignty and self-determination where as irrelevant 100 years ago as they are irrelevant today, when major powers play geopolitics. The PLO, and especially the dominant PLO member faction Al-Fatah (Fateh) have long been criticized for signing the Oslo Accords and for accepting the two-State solution.

Many PLO member organizations, including the Popular Front for the Liberation of Palestine (PFLP), and former PLO member organizations like the Popular Front for the Liberation of Palestine – General Command (PFLP-GC) have consistently denounced the Oslo Accords as impossible and/or defeatist, and as a means to implement an Israeli-dictated one state-solution or greater Israel by stealth and deception. It must be noted that the Oslo Accords are no treaty and never were legally binding. A treaty was promised five years after the accords but was never signed.

The PLO signed the accords based on the “assumption” that Israel would, in earnest, negotiate a final settlement of these issues within a five-year period. What the PLO received from the hands of Israel was decades more of settlement expansion but no settlement. No final treaty was signed in 1998, as promised.

Considering the track-record of Al-Fatah and the al-Fatah dominated Palestinian Authority which has usurped many of the functions of the PLO, it is likely that Erekat’s statement about a one-State solution was mostly posturing. However, the number of Palestinians and progressive Israelis who admit that a two-State solution always was and always will be impossible and that a secular one-State solution with equal rights for all citizens is the only viable solution that could bring a lasting peace continues to grow.