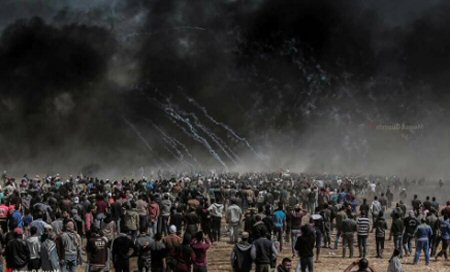 The European Union (EU) has called for the opening of a full investigation regarding the killing of Palestinian demonstrators by Israeli forces along the Gaza Strip’s borders, on Friday.

The EU mentioned, in a press release, that the soldiers used live bullets intensively, leading to the death of 4 demonstrators, including a child, while hundreds have been wounded.

High Representative of the Union for Foreign Affairs and Security Policy / Vice-President of the Commission, Federica Mujerini, called to end the escalation in the Palestinian territories and to provide an explanation for the violent incidents against Palestinians demonstrators which led to the deaths of some of them.

The EU urged the Israeli army to stop using the lethal force against the unarmed Palestinian demonstrators, adding that the priority, now, is to avoid another escalation of violence that will lead to more loss of life.

Four Palestinians, including a child, were killed last Friday and 729 Palestinians were injured because of Israeli suppression of the peaceful demonstrations along the eastern border of Gaza Strip. Therefore, the number of Palestinian deaths has been raised to 37, since the beginning of the Great Return March.

According to Al Ray, Palestinians are continuing with the Great Return March, which began on the 30th of March, on the eastern border of Gaza Strip. It will culminate on the 15th of May, the anniversary of the Palestinian Nakba, whereupon the Palestinians will demand the return to their homes from which they were displaced in 1948.