Foreign Ministers from the European Union (EU) are expected to discuss US President Donald Trump’s “Deal of the Century” and deliberate countermeasures to the plan on February 17, during a meeting in Brussels, according to Israeli newspaper Haaretz.

The paper reported that the decisions are still unclear. However, the EU will publicly condemn the so-called “deal,” and may adopt a decision which reforms the EU vision of the Israeli-Palestinian conflict.

According to Al Ray Palestinian Media Agency, Israeli ambassadors in Europe have, for weeks, reportedly been lobbying for the success of the plan presented last month by US President Donald Trump, in a bid to convince EU leaders to accept and promote the unpopular diplomatic gambit.

The decisions of the European Union are taken by unanimous consensus of the member states of the Union. However, Israel circumvents such decisions by exploiting its relations with some of the Union’s member states, such as Hungary, which has thwarted many similar decisions in the past and is expected to continue in this pattern.

Ha’aretz quoted sources familiar with the contents of the talks as saying that Israeli delegates claim they are ready to resume “negotiations” with the Palestinians, and that the European Union’s opposition to Trump’s deal will encourage Palestinian rejection.

Following the release of the US president’s proposal, the EU announced that it will study the deal. But, last week, European Union Foreign Minister Josip Borrell announced his rejection of the deal, following comments by Israeli Prime Minister Benjamin Netanyahu, of his intention to annex the settlements and the Jordan Valley to Israel.

EU external affairs spokesperson Peter Stano said that the EU remains committed to a two-state solution within the 1967 borders, noting that Monday’s meeting will look into “how best to respond to further developments on the ground.” 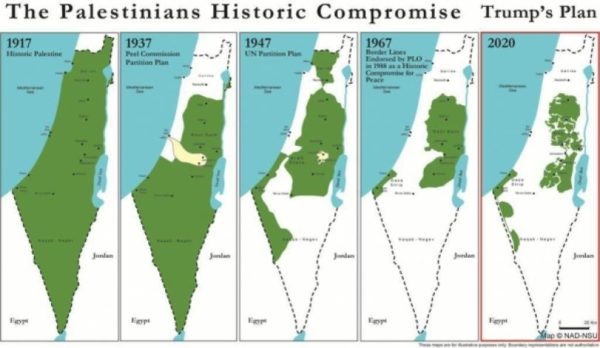 The phase of mapping the areas addressed in the “Deal of the Century” is an Israeli vision that is endorsed by US administration, expert of maps and settlements at the Orient House in occupied Jerusalem, Khalil Tafakji, further states.

He considers the formation of a specialist committee to draw the maps as an Israeli move which seeks American supervision and protection, in an attempt to divert from international law.

He added that the maps which were presented and included in the “Deal of the Century” are in fact a group of projects which started in 1970 and ended with the Sharon Project, in 1990, and are now being applied on the ground.

He explained that the Israeli participants in the committee are just politicians, meaning that the “deal” is purely a political vision which seeks to impede any Palestinian state with geographical continuity.

He noted that the Israeli vision does not include the establishment of a Palestinian state, even in previous agreements such as Camp David and Oslo.

“Israel exploited the negotiations , Arab weakness, and the Palestinian division to apply its plans;  when the US administration put the plan, it took into consideration all the political issues represented in controlling the underground; crushers, above the ground; agriculture and the Jordan Valley, and on the ground so that Israel controls the movements in and out,” Tafakji said.

He warned of the consequences of these maps, which first exploit the communication between the areas. Thus, such areas became easily divided into disputed turf that will be subject to Israel sovereignty.

The second impact is that on future Palestinian expansion, which will only occur on the available land, and any increase will force Palestinians to migrate.

The third impact is the creation of a Palestinian state without an economy, so that it would only be independent to the extent of Israeli satisfaction with the Palestinian Authority.

He stressed that the main goal of Israel and the US is to end the Palestinian presence.

He said that the official Palestinian role cannot be relied on because the data on the ground indicates the full approval of Trump’s proposal. Security coordination is still ongoing, and the normalization conferences are still being held and participated in by the leaders of Fateh and the Palestinian Authority, in addition to the prosecution of every Palestinian who thinks to harm the Israeli occupation.