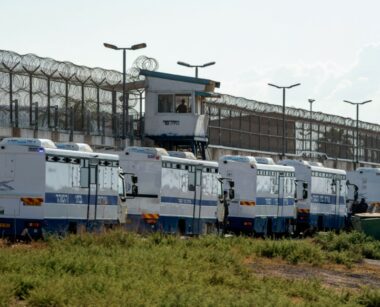 Five Palestinian detainees, imprisoned by Israel under the arbitrary Administrative Detention orders without charges or trial, are ongoing with the hunger strike, including one who began the strike 123 days ago.

The Palestinian Detainees’ Committee has reported that Kayed al-Fasfous started the strike 123 days ago, and is facing life-threatening complications, including the possibility of death especially after diagnosis showed he developed blood clots.

Al-Fasfous, hospitalized at the Barzilai Medical Center, also frequently loses consciousness, in addition to suffering from arrhythmia, sharp pain in the chest, seriously low blood pressure, low mineral levels, in addition to pain in his joints and various parts of his body.

Besides al-Fasfous, detainee Ala’ al-A’raj continues the hunger strike he started 99 days ago, Hisham Abu Hawwash, 90 days ago, Ayyad al-Hreimi who started 53 days ago, and Luay al-Ashqar, 35 days ago.

On Thursday, the Legal Department of the Detainees Committee filed an appeal with the Israeli High Court demanding the release of al-Fasfous by voiding his Administrative Detention order, especially since the court froze the orders twice without canceling them.

Hasan Abed-Rabbo, the Committee’s spokesperson, said that the striking detainees are facing difficult conditions, including constant pain, low levels of minerals in their bodies, dizziness, fatigue, and other complications.

Several days ago, Israel extended the remand of detainee Ala’ al-A’raj for eight days and alleged it is filing an indictment against him, in an attempt to claim that he is not an Administrative detainee to avoid listening to his legitimate demands.

An Israeli court also decided to reduce the six-month Administrative Detention order against Hisham Abu Hawwash, to four months, which also means that he could likely be slapped with a new order instead of being released.

The Committee stated that these maneuvers only aim at denying the legitimate rights of the detainees, especially by trying to change their detention status or claim to obtain information that is never shown to the defense attorneys.

The Committee called on all local, regional and international legal and human rights groups to intervene and force Israel to end its violations of International Law and all related treaties regarding the rights of the detainees, and to end the constant violations and abuse.

It is worth mentioning that, three days ago, detainee Miqdad al-Qawasma ended the hunger strike which lasted for 113 days, after reaching an agreement for his release in February of next year, 2022.