Football In Ireland for Gaza Youth 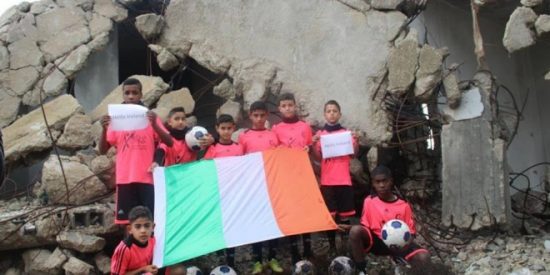 Children from the Al-Helal club, in the besieged Gaza Strip, are in Ireland and enjoying a 10-day visit of fun and football!

The footballers, aged from 10 to 14 years old, are staying and playing in Nenagh, Co Tipperary, as well as in Maynooth, Dublin, Limerick, Kinvara and Wexford over the coming days.

“We couldn’t be more delighted to have these lovely children finally here to see us,” Gaza Action Ireland (GAI) coordinator Zoë Lawlor said.

“The situation for Palestinians in Gaza trying to play sports, living as they do under siege, is extremely difficult. The children are hampered by lack of facilities, equipment, places to play and restrictions on their movement. This visit to Ireland will provide a wonderful chance for them to meet other children, experience a new culture and to tell their stories — we have a lot to learn from them,” she added.

The children are due to play football in Dublin and participate in several activities throughout Ireland, despite some delays due to delays in their permits to travel from Gaza.

The long effort of fundraising and red tape to bring the children to Ireland was launched by former Ireland manager Brian Kerr in 2014, along with former rugby international Trevor Hogan.

According to the PNN, Hogan and Lawlor have led the GAI team that organised ‘Gaza Kids to Ireland’ – having first met many of them on a visit to Gaza in 2013. Al-Helal’s clubhouse and facilities in northern Gaza were damaged by Israeli bombing in 2012, and again in 2014.

“As well as giving the kids a much needed break from stress and conflict, it is a great opportunity for the people of Ireland to participate and support them,” Lawlor said.

There are 14 children visiting from Gaza, joined in Ireland by two of their adult coaches and carers.

The population of Gaza, now approaching two million people, lives under an illegal blockade imposed by Israel, and these children have already lived through three wars on their territory.