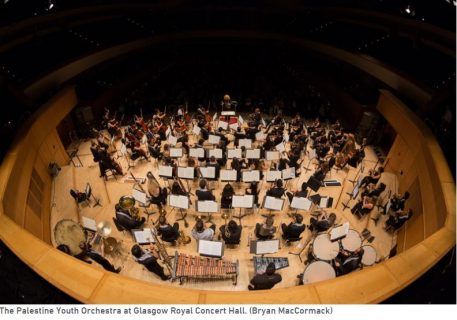 Palestine Youth Orchestra at Glasgow Royal Concert Hall, 26 July 2016
Sarah Irving – Electronic Intifada: True to form, the rain is hammering down on Glasgow. In the foyer of the Royal Concert Hall, young men in sharp black, wearing scarves bearing the unmistakable checkered print of the Palestinian kuffiyeh, are prowling around moodily. One detects pre-performance nerves.

This is the second night of the Palestine Youth Orchestra’s six-night debut tour of Britain. On the first night of their tour, the orchestra filled the concert hall in Perth; their show in Glasgow’s monumental concert hall sold out. The remaining tour stops include Leeds, Birmingham, Cardiff and finally London.

If there were indeed pre-show nerves, they weren’t necessary: the Palestine Youth Orchestra received a full standing ovation. Not even greats like the St. Petersburg Philharmonic get that when performing in Scotland.

The Palestine Youth Orchestra know their audience. Their diverse program showcased their skills, but also allowed for the fact that, as a newcomer to the international scene, ticket sales will for the moment rely as much on solidarity as on attendees with a passion for classical music. With a range of different styles and feels, the ensemble’s selections were clearly – and successfully – intended to appeal to all tastes.

First up was the Leonore Overture No.3 from Beethoven’s only opera, Fidelio. As Layth Sidiq, the orchestra’s skilled concertmaster, pointed out in one of the many short introductions and commentaries made by different members during the evening, the opera’s plot resonates strongly with the group of young Palestinians, as it tells the story of a young woman disguising herself to free her husband from political prison… (Continue reading at the Electronic Intifada.)