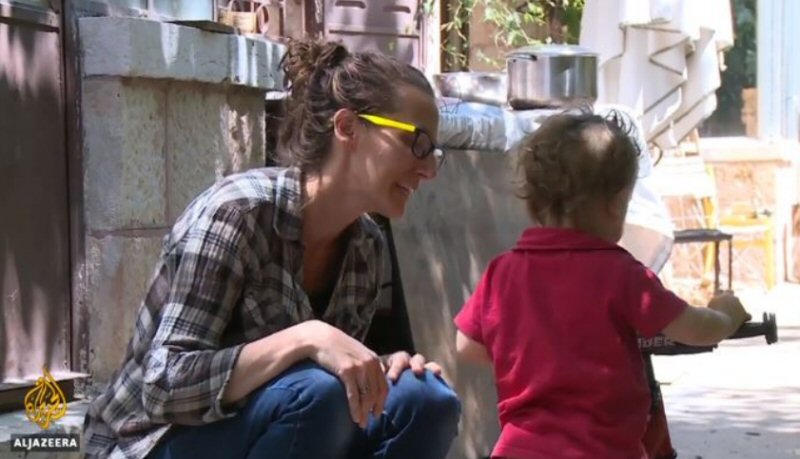 Four suitcases, memories of 35 years and a hope to meet friends again, in Palestine, are what US citizens Roger Heacock and Laura Wick are leaving Ramallah with.

The couple arrived to Palestine in 1983, initially planning to stay for a few years in solidarity. But they ended up with a family and a career here: Heacock is a renowned history professor and Wick is a midwife and health researcher at Birzeit University.

Both say they didn’t plan to stay this long – or leave this way.

In May, when they came back from a trip abroad, Israeli immigration officers gave them a two-week tourist visa and told them that they could renew it at the Israeli military coordination office in Ramallah.

They applied for a renewal, but never got a response.

“We can’t stay, because if we stay – and we’re already a month over, we’ll be more and more illegal, and then it’s easy enough for them to say we have disobeyed procedures,” Heacock told Al Jazeera on his last day in Ramallah.

Since June, Israeli authorities have refused to renew the visas of at least six other international faculty members at Birzeit University.

In the past two years, according to a recent Palestinian education ministry survey, half of the faculty members holding foreign passports in eight leading universities have been negatively affected by an upsurge of entry denials or visa restrictions by the Israeli authorities.

For the better part of the last decade, both Heacock  and Wick had to travel every three or six months in order to renew their B2 visitors visa – the only type of visa Israel grants to foreigners seeking to stay in Palestine.

An option they deemed too risky at a time Israeli authorities seem to be clamping down on visa renewals, as they may be denied entry all together.

Heacock is convinced his situation and that of his wife’s is part of a concerted effort that has nothing to do with the persons involved or whatever security assessment the Israeli government may have – a sentiment echoed by activists familiar with the issue.

“By addressing the foreign nationals who are coming to add value to the community, by not letting them come in, the quality of life is reduced and that is more suffocating for Palestinians forcing them to leave the country,” Sam Bahour, a co-founder of the Right to Enter campaign, said.

The Israeli visa renewal rate has dropped from 70 per cent in 2017 to about 10 per cent so far this year, officials at the Palestinian civil affairs commission told Al Jazeera.

Among the worrying developments reported by foreign nationals were shifting documentation requirements, lengthy processing time, shorter durations, stamps that restrict their movement to the West Bank and demands of financial bonds that can reach up to $22,000.

Since the Palestinian Authority doesn’t control its borders, the issue of granting visas to foreign nationals seeking work or residency in occupied Palestine lies solely in Israel’s hands. This leaves the civil affairs office with little to do, beyond collecting applications, handing in files and passing on responses.

Morgan Cooper, also from the US, is waiting on her response.

The California-native came to Ramallah in 2004. Five years later, she met her Palestinian husband, Saleh Totah, in his restaurant.

She’s one of an estimated 35,000 foreign passport holders who applied for a family unification to get a Palestinian residency. But since that was frozen around the time she got married – Israel views control over the population registry as a political issue and a bargaining chip in future talks – B2-visitors visa became her blessing and curse.

“I have to turn my passport to the Israelis in a week. Who knows what it will come with or without,” Cooper told Al Jazeera. “What kind of life do you have here if you don’t know? I don’t know next month if I will be allowed to stay here.”

If she didn’t get a renewal, Cooper is left with little choice: she can overstay her visa and give up moving anywhere beyond Ramallah as she would be illegally present, or leave the country and try to get a new visa at the borders, risking not being able to come back home.

Cooper and Totah said they are in it for the long run, yet divorce became a conversation around the dinner table – as the couple try to find ways to stay home.

Twice, Cooper said, Israelis told her to either immigrate to the US or divorce her husband. “You shouldn’t have married an Arab,” Cooper said the head of the visas once told her.

Cooper, Totah, Heacock and Wick all said they are fighting in the dark. The Israeli procedures are not written, they are unclear and often change, they said.

What can be used as grounds to issue visas can be also used to reject them.

People like Heacock and Wick are required to submit a work contract to get a visa, which says “not allowed to work.”

As non-residents, Cooper and others could use the Israeli airport to travel abroad; apparently, not any more.

The list is long, but one person sitting behind a desk in the Israeli military coordination office in Ramallah seems to be calling the shots and testing new grounds, according to another activist with the Right to Enter who didn’t want to be named.

“They will restrict everything they can restrict as long as it doesn’t cost them much,” she said.

In response to a question by Al Jazeera, the Israeli coordination office said the policy regarding entry of foreign nationals did not change.

The problem is that there seems to be no clear policy to change, Palestinians argue.

“It’s a sloppy application of [the Israeli] military control; they try to claim that this is part of an Israeli immigration policy, they forget or want to forget that… this is a military occupation; our legal reference point is the fourth Geneva convention not the Israeli ministry of interior,” Bahour said.

“However, the only country in the world that doesn’t accept this as a military occupation is Israel, the occupier.”