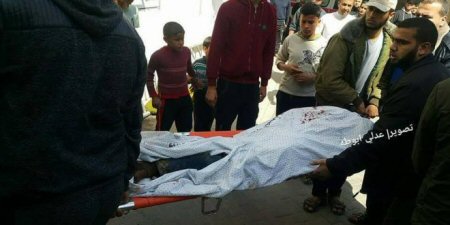 Four people were killed and several others injured, on Saturday, in what initially appeared to be an Israeli artillery attack targeting a group of Palestinians who were riding a three-wheeled “tuk tuk” motorcycle (rickshaw) east of Rafah, in the southern Gaza Strip. Other accounts indicated that the four died in a training accident.

The four were identified as  Amjad Qartous, 18, Ayed Hamaydeh, 23, Hesham Kallab, 18, and Hesham Abdul-Al, 22. All four were from from the southern Gaza Strip city of Rafah.

Islamic Jihad claimed the four young men as fighters in their armed wing, and published a photo of the four wearing the uniform of Islamic Jihad.

But a later report indicted that the four men may have been killed by an explosive that went off in a training accident.

The four deaths follow a day of protests at various places along the Israel-Gaza border, in which one Palestinian was killed and 969 Palestinians were wounded .

Dr. Ashraf al-Qadra the spokesman for the Ministry of Health in Gaza said that 4 Palestinians were  killed & several others wounded  in the incident on Saturday, adding that the slain and injured were taken to Abu Yousef al-Najjar hospital.