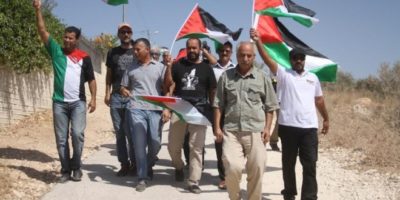 A number of youths were wounded by rubber-coated steel bullets, as well as tear gas and sound bombs fired by Israeli soldiers during their assault on the weekly peace march in the town of Kufur Qaddoum, in the Qalqilia governorate in the northern West Bank.

According to the Palestinian News Network, one Palestinian youth was moderately injured in the afternoon by a rubber-coated steel bullet in his foot after Israeli soldiers opened fire on the weekly peace march in the town.

Morad Eshteiwi. a local organizer in the village, told PNN that a number of citizens were suffocated as a result of inhaling tear gas fired by the Israeli occupation forces on the weekly march which takes place every Friday.

The protest is held each week to express the people’s rejection of the practices of the racist occupation, most notably the construction of the wall and the confiscation of their land.

It is noteworthy that the town of Kafr Qaddum is one of the most prominent villages involved in the popular resistance to confront the Israeli occupation and organize weekly marches.

Due to the Israeli military’s violent response to these non-violent demonstrations, the protests usually end in violent confrontations.