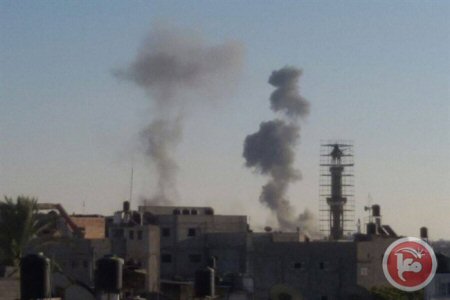 The Israeli army, Sunday night, targeted and destroyed an outpost in the besieged Gaza Strip, said to be used by the Hamas movement as an observation post, according to the Israeli army.

The Israeli army spokesperson said, on Twitter, that a tank targeted the outpost in response to a rocket that was fired from Gaza earlier in the evening, which landed in an open area in the Eshkol Regional Council of southern Israel and caused no injuries or damages.

Local sources in Gaza said that the site targeted by the Israeli shelling was located in the Abu Safiya area east of al-Maghazi refugee camp in the central Gaza Strip.

According to Ma’an, the Israeli army says it holds Hamas accountable “for all attacks from the Gaza Strip that threaten Israel and her citizens.”

However, Hamas has not claimed responsibility for any rocket attacks since a ceasefire was declared after Israel’s devastating war in Gaza in 2014, and the movement has attempted to clamp down on armed activity by smaller political groups that do launch rockets from the territory.

According to Israeli news daily Haaretz, all of the rocket fire from Gaza this year was not orchestrated by Hamas but rather by small organizations that identify with the Salafist-Jihadist movement in the enclave.

Sunday’s incident follows a reported detention campaign targeting members of these organizations over the past few days, launched by Hamas after after the last rocket was fired from Gaza into Israel in August, Haaretz reported.

Separately, the Israeli army detained two Palestinians when they approached the border fence to the east of Rafah early Monday, according to Israeli media.

Israeli news site Ynet said a search on their person found no weapons, and that the two were taken for questioning.