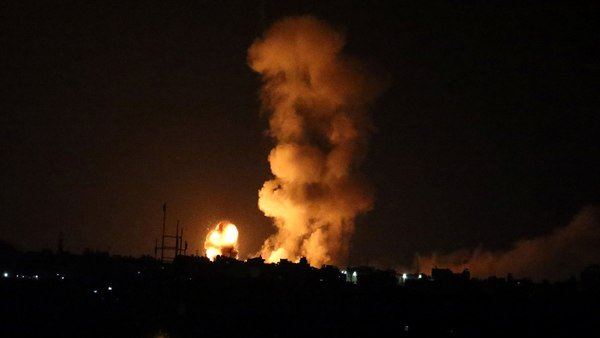 As night fell on Friday evening, after Israeli airstrikes killed  Palestinian fighters that afternoon, and one Israeli soldier stationed at the border was reportedly killed, reports began coming in on Twitter from different parts of Gaza showing Israeli fighter jets dropping bombs.

The Israeli army said one of its soldiers was seriously injured by Hamas fighters near the southern part of the Gaza Strip, during what it called a military activity near the border fence, in southern Gaza, and later died from his wounds.

The name is of soldier has not been released at the time of this report.

The extent of the damage is unknown as of yet, and the airstrikes appear to be ongoing. As the loudspeakers sounded the call to evening prayer from mosques across the Occupied Territory, the sound of Israeli fighter jets filled the sky, and bombs began to fall.

The Israeli army said it targeted and destroyed 25 sites, run by armed resistance groups in Gaza, including monitoring and training centers.

The bombing came just hours after Israeli Defense Minister Avigdor Lieberman stated that he was planning to launch a large-scale war in Gaza similar to the one in 2014, in which 2200 people were killed. In his statement, he said the ‘Palestinian people will pay the price’ for the continued non-violent protests at the border, which have been going on for 100 days.

One woman in Khan Younis filmed a bombing on her phone, and posted it on Twitter with the caption, “I have heard twenty bombs in the last 30 minutes”. Several people live streamed on Facebook from different parts of Gaza, as the bombs began to drop.

The Israeli strikes were carried out in several parts of the Gaza Strip, including sites run by the al-Qassam Brigades, the armed of Hamas, in Rafah and Khan Younis, in addition to missiles fired into the Zeitoun neighborhoods, east of Gaza city, causing several injuries.

The Israeli army claims it “was retaliating to shells fired against its soldiers near Gaza’s eastern border area, while Hamas said it was retaliating to the killing of four Palestinians by army missiles, Friday.

It said that Palestinian fighters fired shells into areas in Shaar HaNegev and Sdot Negev Regional Councils of Settlements,  and added that the Iron Dome missile defense system managed to intercept two.

It stated that one shells landed and detonated in an open area in Shaar HaNegev. The reported shells did not lead to any casualties.

The sirens were heard amid an escalation along the Gaza border with Israel.

Fawzi Barhoum, the spokesperson of Hamas in Gaza, said that Israel has chosen the path of war and offensive on Gaza and its people, by murdering unarmed protesters, and added that these killings have raised the bar of retaliation.

“Israel will be held accountable for its crimes; our resistance has the moral and legal duties to protect its people, despite the dire consequences of its retaliation,” Barhoum said, “Shelling will be met my shelling – the resistance is ready, and capable of retaliation and of fighting for the liberation of its people, for breaking the siege and continuing the struggle for independence.”

In announcing the death of the soldier, the Israeli military did not release the name of the soldier, but issued a statement that, “Hamas will be held accountable for this incident as well as the series of the terror activities it has been executing over the past months. Hamas has chosen to escalate the security situation and will bear the responsibility for its actions.”

The reference to ‘terror activities’ appears to be a reference to the three months of non-violent protests that Palestinians have engaged in at the Gaza-Israel border fence. According to the Palestinian Health Ministry, in the period between March 30th and July 17th, 2018, Israeli forces killed 142 Palestinian non-violent demonstrators, and wounded 16496. No Israelis were killed during that time period.

During this period, Palestinian demonstrators have gathered each Friday at the border fence between Gaza and Israel for the ‘Great March of Return’, in which they are demanding a lifting of the decade of sanctions against Gaza, the opening of the border, and the right of return for Palestinian refugees to homes they were forcibly removed from in 1948 during the creation of the state of Israel.