Ghaith-Sub Laban Family Allowed to Stay in their Home for 10 Years, but Without Children 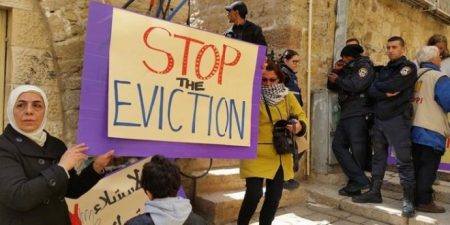 The Israeli High Court released, late on Tuesday, its decision regarding the Ghaith-Sub Laban eviction, in which the court partially accepted the family’s appeal and stopped their eviction.

The decision keeps the family’s protected tenant status for 10 more years, after which the family would be evicted and the house would be handed to the Israeli settler organization that requested the eviction.

The decision, however, limits the right to live in the house to Mrs. Nora Ghaith and her husband, Mustafa Sub Laban, without their children. The court also excluded, from its decision, a small storage room for the family under the house which Israeli settlers can proceed in taking over.

The decision comes one day after a hearing held in front of the Israeli High Court, yesterday, in which the court heard the family’s appeal against the eviction and the settler’s claims that the family “abandoned” their house years ago. During the hearing, the court proposed a compromise to both parties, under which the protected tenancy status would be limited to Nora and her husband, and the family would only be allowed to stay in the house as long as Nora and her husband are alive.

The settlers rejected the court’s suggestion and, instead, proposed evicting the family and moving them to the small storage unit under the house, which is no more than 20 square meters in size.

The court disregarded the settlers’ suggestion and ended the hearing, only to come back with this decision the following day.

According to the PNN, Nora Ghaith’s family rented the house, which is located in the Old City of occupied East Jerusalem, in 1953, from the Jordanian Custodian of Public Property. She continued to live in the house after 1967, and currently lives in the house with her husband, her two sons Ahmad and Rafat, her daughter Lama and her daughter-in-law Ruba and two grandchildren, Mustafa and Kenan, aged 9 and 4.

Nora Ghaith-Sub Laban commented by saying that the court simply acknowledged the settler’s claims that the house is abandoned, and ruled to separate her family. As per the High Court’s decision, Nora will have to be separated from her grandchildren as well as her unmarried son and daughter.

In case the family refuses to comply with the court’s decision, the settlers can file a new request to evict the family before the 10 years have passed.

Journalist and human rights activist Ahmad Sub Laban further added that the decision, in fact, evicts part of the family and keeps another temporarily.

Israeli judiciary, once again, sustains the regular discrimination which Palestinians face, where Israeli settlers are allowed to reclaim property they allegedly owned pre-1948, whereas Palestinians are prohibited from the same.

Today, the public also witnessed how the court ruled to separate a family by deciding who can live in the house and who cannot.

The Israeli High Court, as with all similar eviction or house demolition cases, seems to be proving itself a partner to settlement expansion, and to settler ambition to take over as many houses as possible, in occupied East Jerusalem. Such “justice”, it is said, only  legitimizes occupation policies that are in violation of international law, and serves to further augment the annexation of East Jerusalem, after 1967.