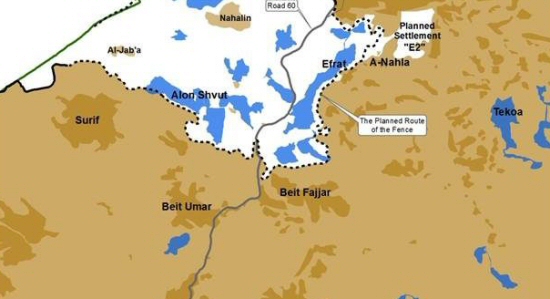 The Palestinian Authority’s Prime Minister, Rami Hamdallah, on Monday, condemned an Israeli plan to appropriate Palestinian land in order to establish a new settlement in the West Bank.

“Israel’s move to build a new illegal settlement and bypass road next to Bethlehem is another step into cutting the West Bank in two, and annexing Area C,” Hamdallah said, according to the PNN. “Israeli authorities are doing their best to destroy the historic character of Bethlehem,” he added.

Israel is looking to grab Palestinian land next to the illegal settlement of Efrat in order to build a settler-only road, connecting Efrat to a planned new settlement called Givat Eitam. The new settlement will be located east of the separation wall and will house 2,500 units, according to a blueprint by the Israeli Ministry of Construction and Housing.

The construction of the planned settlement would all but complete the encirclement of Bethlehem, rendering any development of the city impossible. Currently, Bethlehem is surrounded by settlements and bypass roads on three sides.

“The building of the settlement and the settler-only road would practically cut Bethlehem off the Southern West Bank,” said Jamal Dajani, Director of Strategic Communications & Media at the Prime Minister’s Office. “The international community has an obligation to stop Israel’s illegal and ongoing land theft, before there is nothing left of Palestine.”

Israeli settlements control more than 42 percent of the land in the West Bank through “regional councils,” including land reserves, agricultural and industrial facilities, settler-only roads, and other infrastructure. In 2009, Israeli Prime Minister Benjamin Netanyahu committed to not building any new settlements after harsh criticism from the international community. However, this promise has not stopped his government from continuously appropriating private Palestinian land and approving plans for new settlements.

The planned settlement of Givat Eitam (referred to as “E2”)  (Source: Peace Now)