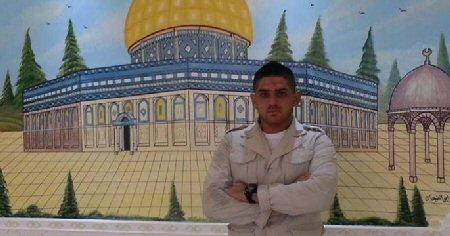 Administrative detainees, who number over 450 of the total of over 6,000 Palestinian political prisoners in Israeli jails, have boycotted the Israeli military courts that rubber-stamp their detention orders since 15 February in an ongoing collective action.

Shokeh launched his hunger strike on 3 June after he was ordered to administrative detention without charge or trial rather than being released as promised in an agreement made following his hunger strike in November 2017. Shokeh, 30, has been arrested on multiple occasions and has spent a number of years jailed without charge or trial under administrative detention. Shokeh is currently held in isolation in the Ramle prison clinic as his health continues to deteriorate. Prisoners of the Islamic Jihad Movement, in Ofer prison, returned their meals for three days in solidarity with Shokeh’s strike.

Shokeh was seized by the Israeli occupation on 29 September 2017, only one month after he was released from Israeli jails on 31 August 2017. He launched his open hunger strike for the first time, on 11 October, after he was ordered to administrative detention without charge or trial. He suspended the strike on 14 November after 35 days, when his case was moved to the military courts. There, he was sentenced to six months in Israeli prison. After his sentence expired on 3 June 2018, however, he was not released but arbitrarily ordered once more to administrative detention without charge or trial.

The Palestinian Prisoners’ Society reported, on 16 July, that Shokeh visited with his lawyer at the Ramle clinic and moved around using a wheelchair. His lawyer said that he has lost 30 kilograms since his strike began, and has severe kidney and eye pain. In addition, the lawyer said that he lost consciousness on multiple occasions during the visit. He is consuming only water during the strike and has refused to take vitamins or receive medical examinations.

Jawarish, from Aida camp; Awad, from al-Khalil; and Ayyad, from Dheisheh camp, have all been held without charge or trial under administrative detention for 18 months. They launched their strike with two other prisoners, Khader al-Dalu of Bethlehem and Salim al-Rajoub from al-Khalil, on 5 July. Al-Dalu and Rajoub suspended their strikes on 15 July after they were told that their current administrative detention orders were final and would not be renewed. These strikers are held in solitary confinement in Ofer prison, where they were moved immediately after launching their strike.