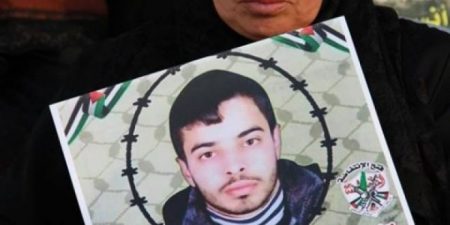 Two Palestinian detainees, Anas Shadid and Ahmad Abu Fara, are reportedly facing a sharp health deterioration due to their hunger strike, which has now entered its third month, in protest of Israeli administrative detention practices which are conducted without charge or trial, and based on secret information.

A lawyer from the Palestinian Prisoners Society (PPS) said, following a visit paid to the Israeli Assaf Harofe Hospital, that the detainees have been diagnosed with a severe weight loss, headaches, dizziness, sight disorders, breathing difficulties, cardio-vascular diseases, and stomach pains.

PNN further reports that, according to the Palestine Information Center, the lawyer added that the hunger strikers have not taken showers for 20 days due their inability to stand on their feet.

He noted that the detainees are held in an isolated room in the hospital and that harsh measures, including visit restrictions, are being pursued against them despite an earlier decision to suspend their administrative detention.

The lawyer quoted the two hunger strikers as vowing to continue their hunger strike until the Israeli occupation authorities end their administrative detention and transfer them to a Palestinian hospital.