Palestinian Girl Sentenced to Over 13 Years in Prison 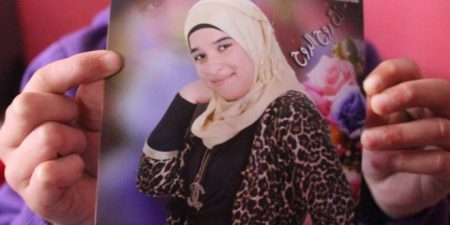 An Israeli magistrate court in Jerusalem, on Wednesday, sentenced a teenaged Palestinian girl to 13-and-a-half years in prison, for a stabbing attack carried out exactly one year ago in Jerusalem.

According to a statement released by the Palestinian Prisoner’s Society (PPS), lawyer Mufid al-Hajj reported that the prison sentence handed down to 17-year-old Nurhan Awwad also came with a fine of 30,000 shekels ($7,757).

Exactly one year ago, when Awwad was 16-years-old, she carried out a stabbing attack with her 14-year-old cousin Hadil Wajih Awwad, who was shot dead by an Israeli security guard during the incident.

Meanwhile, Nurhan was severely wounded with two bullet wounds in her stomach.

Video footage showed both girls running at the security officer waving scissors, before the security guard and another Israeli managed to knock the girls to the ground.

Once on the ground, the security guard ran forward and shot each of them several times.

According to Ma’an News Agency, Hadil Awwad, a resident of the Qalandia refugee camp, died almost immediately. Her brother, Mahmoud Awwad, reportedly died in 2013, several months after he was shot and injured during clashes with Israeli troops inside the refugee camp.

Rights groups have repeatedly denounced what they have termed Israeli forces’ “shoot-to-kill” policy against Palestinians since a wave of violence first erupted in the occupied Palestinian territory and Israel in October, so far leaving 240 Palestinian killed, stating that a number Palestinians had been shot dead even when not constituting an immediate threat at the time of their death or when they could have been subdued in a non-lethal manner.

Nurhan Awwad’s prison sentence is the latest in an Israeli crackdown on Palestinian teenagers who have committed attacks against Israelis, while Israeli authorities have ordered lengthy prison sentences for Palestinians as young as 14 years old.

Ahmad Manasra, 14, made headlines earlier this month when he was sentenced to 12 years in Israeli prison after he was charged with attempted murder for carrying out a stabbing attack on Oct. 12, 2015 that left two Israelis seriously injured. In addition, the court imposed a fine on his family of 180,000 shekels ($47,187).

Meanwhile, on Monday, an Israeli court in Jerusalem also sentenced 19-year-old Subhi Abu Khalifa from the Shufat refugee camp in the West Bank’s Jerusalem district to 18 years in prison for committing a stabbing attack in Jerusalem last year that left two Israelis injured.

In addition, the family of Palestinian prisoner Abed Dwiyaat, 20, said on Monday that their lawyer had reached an agreement with Israeli prosecution, suggesting that Dwiyaat would be sentenced to 18 years in prison for causing the death of an Israeli man after throwing rocks at his vehicle.

In August, the controversial “Youth Bill” was passed in Israel’s parliament, the Knesset. The bill allows Israeli authorities to imprison a child under the age of 14 if convicted of “terrorism” against Israeli civilians or military personnel.

While critics said the bill was intended to punish primarily Palestinians from occupied East Jerusalem who attempt attacks on Israeli civilians and military, it is just one of several laws which have been passed over the last year targeting Palestinian minors and fast-tracking the imprisonment of Palestinian youth.
In July 2015, legislation was passed in the Israeli Knesset allowing sentencing for up to 20 years for someone convicted of throwing stones at vehicles if intent to harm could be proven. However, the law allows the Israeli state to imprison someone for up to 10 years without proof of intent.

The vast majority of those detained for throwing stones at Israelis are Palestinian minors.

In November, Israel established legislation allowing the sentencing of Palestinians to a minimum of three years in prison for the act of throwing a stone at an Israeli. Included in the legislation were provisions allowing Israeli authorities to strip stone throwers in East Jerusalem of their state benefits and cancel access to national health insurance and social services for the families of the accused.

According to the Association for Civil Rights in Israel (ACRI), proposals are also underway to allow Israeli authorities to hand down life sentences to children under the age of 14.

According to prisoners rights group Addameer, 400 Palestinian minors were detained by Israel as of October, many of whom the group said were beaten, threatened, sexually assaulted, and placed in solitary confinement during their interrogation and detention.

Soldiers Abduct Five Palestinians, Including One Woman, In Hebron And Jenin