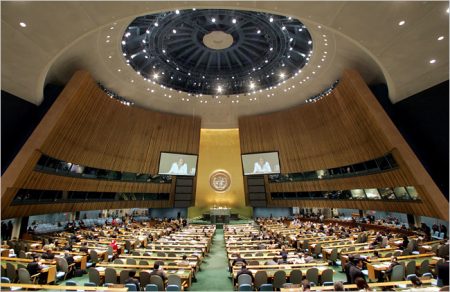 The Social, Humanitarian and Cultural Committee (Third Committee) of the United Nations, on Monday, voted overwhelmingly in favor of the right of Palestinian self-determination.

The UN vote re-institutes the right of the Palestinian people for self-determination, including their right for having an independent State of Palestine.

The vote also urges all countries, United Nations organizations and other competent authorities to continue in supporting the Palestinian people in their struggle for independence.

Following the vote, the Senior Advisor to the Permanent Observer Mission of Palestine to the United Nations, Nadya Rasheed, said that the international support for this resolution sends a clear message to the Israeli state with the need to end its discriminatory policies and violations against the Palestinian people, and its refusal to resolve the two state solution.